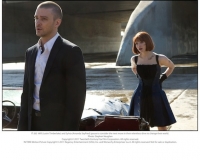 November 4, 2011 (San Diego) – I love surprises. I drove into the parking lot where the In Time screening too place thinking that it was going to be a dime a dozen action film with incoherent stunts and poor camerawork held together by a gimmick. Over two hours later, I went home with a smile on my face.

In Time plays like writer and director Andrew Niccols denounces the current state of the “action film.” It goes against the mindless and offensively brainless “techniques” seen in such movies as Takers and the last two Transformers films. I’m talking about the nauseating swirly cam, incoherent cutting, and vapid characters with as much depth as the life-size cardboard advertising cutouts you see at the multiplex.

In Time takes place in an alternate universe where people use time as currency. A person is born with twenty-five years to live. That person can spend that time (usually in increments of minutes) on goods. For example, a cup of coffee costs four minutes and the price of a bus ride is two hours. If a person runs out of time, he or she dies.

Will (Justin Timberlake) lives in the Ghetto, where it’s very unusual for someone to have over a month of time to live. On the other side of the spectrum is New Greenwich, a place for the elite and “wealthy.” These people can practically live forever. After a man gives a century to Will and commits suicide (for reasons unexplained) Will is accused of murder and chased by Timekeeper Raymond Leon (Cillian Murphy).  While hiding out in New Greenwich, he kidnaps the wealthiest man’s daughter (Amanda Seyfried) and the two turn into a Bonnie and Clyde-cum-Robin Hood duo that robs the “banks” to spread the wealth, so to speak.

Production designer Alex McDowell (whose credits include Watchmen, Fight Club, and The Crow) uses a number of visual techniques to illustrate the differences between the Ghetto and New Greenwich. The Ghetto is as blue collar as it gets. It’s heavily industrialized, it’s buildings aged and worn down. Cinematographer Roger Deakins bleaches the frame with harsh “polluted” whiteness not unlike the smoke emanating from the factories. The cars are always used and ready to fail. People’s clothes are always in dire need of laundering.

Compare to New Greenwich, a metropolis that is as white collar and rich as the ghetto is blue collar and impoverished. It has a bit more color and it’s less harsh outdoors; there’s not a single speck of grime. The interiors are opulent to the point of being utopian. Crystal chandeliers adorn most ceilings. The casinos’ vibrant and exquisite designs (down to the detailed carvings seen on the wall) have a lusty charm that would make even the humblest man feel big once he gets one foot through the door.

In Time proves that action films need not have wall-to-wall stunt work. The first car chase clocks in at forty-six minutes and the film has scattered scenes of on-foot pursuits, brief gunplay, and robberies. These action sequences (and there are very few of them) are cut with precision and clarity.

In Time also demonstrates that the Michael Bay School of Editing is not mandatory for an action film. These types of films have an ungainly urgency to them. They attempt to manufacture suspense through such unproven methods as impatient editing and a camera that swirls around as if it were being flushed down a toilet.

Deakins’ camera remains mostly stationary. Neither he nor director Niccols infuses any urgency into the film. It’s not frenetic nor is it fast-paced. Nor is it too slow.

In Time is timely (pun intended if you wish). With all the talk about Occupy Wall Street and the disparity between the 99% and the 1%, it reads as a thinly veiled jab at class inequality. Obviously, this was made before the protests, but it serves as a happily coincidental and potent metaphor of what happens when the rich and elite wield too much power and influence. The recurring line, “For a few to be immortal, many must die,” is chilling.

In Time is currently playing in local theaters.