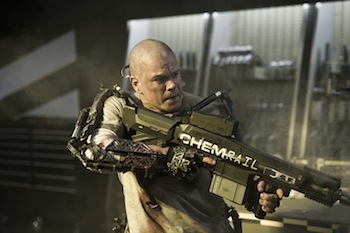 Elysium chronicles a distant future in which the super-wealthy (the 1%) flee the overpopulated and polluted Earth.  Their new home is the titular space station.  For as long as he can remember, Max (Matt Damon) has always wanted to go there.  His lower-class status, not to mention his criminal past, chains him to Earth.  After a freak work accident exposes him to a deadly amount of radiation, he has only five days to live.  That is, unless he can get to Elysium, which entitles its citizens to health stations that can heal any illness or ailment, from broken legs to blown-off faces.

Earth, home to the 99%, is a land of despair painted with monochromatic desaturated desert orange photography.  The smoggy skies overlook Los Angeles’ decrepit slums.  Paved streets long ago gave way to dusty dirt roads.  While heavily populated, there is no vitality, no spirit.  Crime rules the streets, with “justice” handed down by human-size robots that many years ago rendered human police offers and law enforcement officials obsolete.  In one moment of comic relief, Max meets with his “parole officer,” a life-size smiling doll with a cheerful voice and funny hat.

Elysium is a searing indictment of the 1%, their power, and their entitledness.  Elysium's powerful citizens control everything from jobs to air travel.  Even the President is vulnerable to their power.  Elysium’s citizens are dependent on Earth for sustaining their way of living, and benefit from this parasitic relationship by forcing the 99% to work in factories under hazardous conditions.  On the space station, every surface is polished and spotless. (I wonder if they have robots that wipe down every dirty surface these people touch.)  Everyone's hair looks just like it was freshly cut and styled.  Everyone is dressed in only the finest suits with nary a wrinkle.  Not content to own houses, the rich are wealthy enough to live in huge mansions surrounded by palm trees, ponds, and swimming pools where bikini-clad women bask with wine in hand.  It’s the worst of flagrant excess.

The socio-political commentary fortifies what audiences will be paying well-spent money to see: good old-fashioned action that’s unpredictable to boot.  The climactic battle on the space station goes from room to room and boasts explosions, cat and mouse games, gunplay, and deadly double-crossings.  My only gripe here is the editing could have used a little fine-tuning.  The cutting doesn't mesh well with the hyperkinetic camera movement.  I didn't find it incomprehensible as long I could concentrate a little more than usual.

Based on his two feature films, it’s clear that Blomkamp isn’t averse to expressing his political views.  District 9, one of 2009’s best films, retold the story of South African Apartheid with disenfranchised aliens substituting for blacks.  Sony Pictures apparently gave him carte blanche in his expression of the social and political themes, which is quite surprising; Hollywood has always been wary of films that focus on politically and socially charged issues that could turn away potential audiences.  Audiences won't have to wait four years for his next film, Chappie (slated for a 2014 release, barring any delay).  I look forward to hearing what he has to say next.