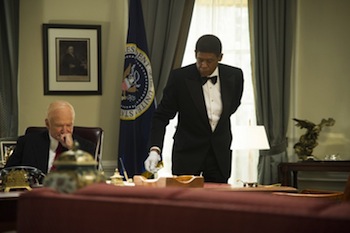 August 15, 2013 (San Diego) – Like Forrest Gump, Cecil Gaines (Forest Whitaker) views American history from a distance, a bystander swept up in a relentless flurry of major historical events that came to dominate and define the latter 20th century.  Like Forrest Gump, Danny Strong's screenplay - based on the Washington Post article by Wil Haywood - mystifies the civil rights movement, the Kennedy assassination, and the Vietnam War.  As major political figures appear, and landmark events transpire or are referenced, the joy of discovery and realization kicks in at full stop.  And like Forrest Gump, it's full of "easter eggs" masterfully hidden that become uncovered with repeat viewings.

Cecil, based on a real-life butler, has a rough upbringing on a cotton farm in the South.  The cruel, racist owner shoots his father in the head in cold blood.  His mother (Mariah Carey) is mentally ill.  Once into adulthood, he departs and finds work.  By 1957, his hard work is rewarded with a prestigious position in the White House, and he works his way up to maître d’hôtel.  Cecil's rebellious and repressed son, Louis (David Oyelowo), becomes embroiled in the Civil Rights Movement, much to his father's worry and chagrin.  Their relationship becomes increasingly strained to the point where Cecil wants nothing to do with him.  Nevertheless, Cecil keeps his head up and dutifully serves seven Presidential administrations for more than thirty years.

After the disastrously received Shadowboxer (2005), Lee Daniels achieved prominence and respect with Precious.  It was nominated for six Oscars, winning two.  Set in Harlem, the cinematography and art direction were strong in the urban and grit department, but weren’t overpowering.  It was the performances that were much more eye-catching and memorable.  For his next film, The Paperboy, he concentrated much of his efforts on filming a slick, sleazy, and lurid atmosphere and visual style.  Consequently, the acting suffered from lack of good direction.

Unless the Academy plans to be generous this year, I doubt The Butler will get some Oscar love for Best Cinematography.  The image is soft and fuzzy as a peach from the soft lighting that lightly bounces off the surfaces.  The White House interiors are a potent decadent white, the walls and tables without a centimeter of dust.  The Gaines' house is lit with a somewhat ungainly orange and not well-kept.

The color palette and art direction are basic and unassuming, two perfect qualities that give way to the vibrancy and vitality of the actors' performances.  I don't often mention the casting director in reviews, but Billy Hopkins deserves a mention here.  Having gone into the film cold - not even glancing at the Internet Movie Database page - I was surprised at the diverse cast he managed to acquire.  I couldn't have imagined Robin Williams as President Eisenhower and playing him serious and so well.  Hopkins knew what he was doing in the casting process; after all, he was the casting director for Gus Van Sant's Good Will Hunting, for which Williams won his only Oscar thus far.

Although consistent in tone, each administration is marked by its own unique atmosphere.  The Eisenhower era is one of anxiety as Eisenhower must deal with using the National Guard to enforce classroom integration per the Supreme Court's landmark decision, Brown v. Board of Education.  The Kennedy era is classy.  Of course, it ends in tragedy and the sadness is amplified as the emotionally distraught Jacqueline Kennedy (Minka Kelly), still adorned in her blood-stained dress, breaks down right in front of the sad, unsure Cecil.  It isn't too long before the film answers back with some much-needed levity.  Lyndon Johnson (Liev Schreiber) is a hoot, and is featured in the movie's funniest scene, when the dignified Cecil stands at his service...by the bathroom door while the President, sitting on the toilet with his two Beagles at his feet, experiences an inconvenient bout of diarrhea.

Strong's screenplay delves deeply into the issue of racism, a recurring topic in American movies this year (42, Fruitvale Station).  Daniels and Strong don't mess around; the first image seen when Cecil recalls his youth is of two lynched black men, a shot framed as such that I could hear Nina Simone's haunting rendition of Strange Fruit playing in my head.  Racial epithets are spewed with disgusting haste and malice.  It is demeaning, demoralizing, and even deadly.  It reaches maximum ugliness when the bus carrying Louis and his activist friends is accosted by the Ku Klux Klan and the Sheriff's Department.  Joe Klotz's editing combines varied speeds - alternately slow and average - and quick cuts befitting the deadly, chaotic encounter.

The Butler is Lee Daniels' "cleanest" film after the gritty precious and the grimy Paperboy.  My sister, a high school English and French teacher, noted that the film could be played in high school classrooms, especially since it’s rated PG-13 (anything with an R rating requires written parental consent).  I agreed with her assessment.  In the wake of the recent Supreme Court decision Shelby County v. Holder, which took away a key portion of the Voting Rights Act, North Carolina’s controversial new voting law, and the controversy surrounding Paula Deen’s racist remarks towards blacks, I hope high school history teachers nationwide will show The Butler to their students for years to come as a reminder of racism’s ugliness.