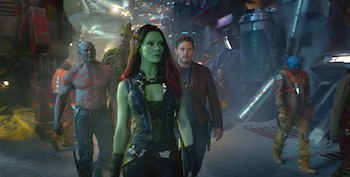 The story makes little sense, even after reading the Wikipedia plot summary multiple times, so I’ll forego the synopsis.  What Guardians lacks in plot, though, it makes up for in character development.  And what an assortment of characters!  Peter Quill (Chris Pratt) doesn't look the hero; he's laid back, panics easily, and always makes precarious situations worse by acting on impulse.  Yet these maverick attributes play a key role in his effective leadership of a team of misfits whose methods and personalities are equally unconventional.

Rocket the Raccoon (voiced by Bradley Cooper), aggressively loud and obnoxious, is as thoroughly likable as any loud and obnoxious character can be.  His wisecracks supply the bulk of the movie's humor.  His sidekick, Groot (voiced by Vin Diesel), mostly stays in the background and speaks only one line (“I am Groot”).  He brings out the best in each character.  His interactions with Rocket echo that of C-3PO and R2-D2.  His verbal repetition humorously grinds on Peter, a running gag the stops before it gets old.

Gamora is isolated, exasperated, and strong-willed – traits typical of Zoe Saldana’s characters – and is the best fighter of the bunch.  She puts all of her energy into each punch, kick, and throw-down.  Drax (Dave Bautista) is the muscular juggernaut with weak social skills.  His inability to understand metaphors, slang, and certain gestures is hilarious.

Like most Marvel Cinematic Universe films, audiences should expect a bevy of classic rock and pop tunes.  More than a showcase of 70's hits, the music serves multiple useful functions.  It establishes the characters, as Redbone's “Come and Get Your Love” does during the opening credits, occurring 26 years after Peter's abduction.  At this point, nobody knows anything about what's become of him other than he was abducted by aliens as a kid shortly after witnessing his mother die from cancer.  Once he presses "play" on his Walkman and the music blares, it reveals the once grief-stricken kid as a carefree, laid-back, and adventurous adult; he dances to the beat as he explores the desolate planet’s ancient ruins, and is bold enough to use a rat-like creature as a fake microphone.  Other times, it amps the intensity of some scenes, like the planning of the prison escape.  The Runaways’ “Cherry Bomb” increases the anticipation and excitement manifold.

The action sequences occur so often and run for so long that the entire movie feels like one big action sequence.  That's not a bad thing here.  Most scenes boast aggressive brawling, gunplay, and air fighting – usually all at once. The air fights run at a breathless pace, are cut with precision, and filmed from perfectly placed camera angles and distances to provide a strong sense of urgency and gravity equal to air fights seen in such films as Independence Day (Roland Emmerich, 1996).  They are a select few CGI-assisted flight sequences that left me feeling I was right there in the cockpit.  The sound design and mixing amplifies each projectile impact and explosion.  The fight coordinators block each fight without pretense.  Instead they aim for realistic fight scenes.  Not like The Raid (Gareth Evans, 2012), but as natural and smooth as they can be in a space opera action film.

Despite the intensity and chaos, the screenwriters leave ample room for humor, the funniest bit involving an inmate's prosthetic leg.  Rocket's wisecracks as he assembles the materials necessary for the prison escape, while an army of prison guards is one projectile away from breaking the glass of their escape vessel, invigorate what could have been just a standard action bit.

The filmmakers impart as much effort into the aesthetics as they do the action choreography.  It's a visual feast.  Outer space sports a green, red, and yellow mixture.  The prison is grimy and yellow, like caked-on urine.  Xandar is bright, clean, and idyllic.  It conjures up images of the blissful and futuristic upper class world in Zardoz (John Boorman, 1973).  The mine is dark, industrial, and bathed in ugly shades of yellow and blue. The opening credits, set on a long-abandoned planet, feature rocky, crumbling ruins as haunting and empty as a California desert ghost town.

As I left the theater, an eerie feeling crept over me. It was a feeling of intense carefree happiness and exhaustion, like a day at an amusement park.  I then realized it was the same feeling I had when I came home from a day at Disneyland with my father in 1996, when I was in 5th grade.

Guardians of the Galaxy is currently playing in wide release.

Brian Lafferty is an award-winning film critic and assistant editor currently living in San Diego.  He graduated with a B.A. in Radio-TV-Film from California State University, Fullerton.  In 2013, he won a San Diego Press Club Award for his film criticism, taking third place for his review of Before Midnight.  He welcomes letters at brian@eastcountymagazine.org.