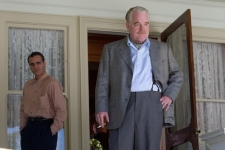 I had two contradictory reactions to his ideas: 1) I knew he was full of crap, but 2) his arguments appear so valid and they sound so truthful, logical, compelling, and right that for some split-second unguarded moments, I took them seriously before my sense of right and wrong brought me back to reality.  Richard Nixon didn’t exaggerate when he labeled Leary “The Most Dangerous Man in America;” The Politics of Ecstasy, if put in the hands of a young, impressionable teenager, would fill his head with bad ideas.

I had the exact same paradoxical reaction to Lancaster Dodd (Philip Seymour Hoffman), the enigmatic leader of The Cause in Paul Thomas Anderson’s newest film The Master.  Like Timothy Leary, everything Dodd says is bull manure.  Any rational human being wouldn't allow himself to buy into his ideas.  Yet, Dodd is charismatic, and his magnetic presence is hard to overcome.  Everything he says is crap, but he sounds so right.

But then Freddie Quell (Joaquin Phoenix) isn’t a rational human being.  Quell is a shaken World War II Naval veteran and drifter who goes from failed job to failed job.  In a drunken stupor, he stumbles onto a cruise ship and passes out.  There he meets Dodd, the enigmatic leader of an emerging religious movement he invented called The Cause.  Freddie joins The Cause, but the directions Dodd takes it makes him question it, and he soon becomes disillusioned.

Phoenix is back in fine form after he and brother-in-law Casey Affleck perpetrated an elaborate hoax that culminated two years ago with the now pretty-much-forgotten I’m Still Here.  It’s nice to see Phoenix takes his craft seriously.  As Quell, his voice emits a subtext that details his frazzled mind and his struggles to stay sane.  To the casual observer, he underacts, but the incisive viewer will notice how his eyes, face, and delivery of his dialogue strongly and clearly communicate his emotions and state of mind.  His performance is the type that comes straight from the heart as opposed to from the mind.

Anderson continues his tradition of filming at least one or two Jean Renoir-style long takes, although none of them here are as eye-grabbing as some of the long takes in Boogie Nights.  Despite the loads of close-ups, the actors’ emotionally-driven performances and Anderson’s balanced compositions hooked me.  The Processing scene illustrates.  In it, Dodd asks Quell a series of questions.  He passes the first part easily.  The second is tougher; the questions get even more personal, but he cannot blink at all.  Doing so results in "infringement,” which means he has to start all over.  Filmed in several long stationary takes at a time, it's easy to see Quell struggling physically with trying to keep his eyes open and mentally trying to keep his cool trying to answer these uncomfortably intimate questions.  I reacted not unlike the “possum scene” in Headhunters, which also required the character not to blink, albeit under much different circumstances.

Paul Thomas Anderson is the type of director you wish would make more movies.  His output is so few that his films’ release dates feel like a holiday.  But as much as I wish he'd be maybe a little more prolific, maybe the flip side is a higher chance of seeing a film of platinum quality, like The Master.