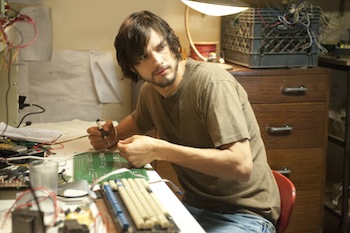 August 16, 2013 (San Diego) – After Steve Jobs passed away in October 2011, Steve Breen - whose political cartoons are always as funny as they are spot-on - paid a more respectful and touching tribute to him.  It showed him, presumably having arrived in Heaven, being welcomed by Thomas Edison and Benjamin Franklin.

Looking at the cartoon again just gave me goosebumps.  Comparing Jobs to Edison and Franklin is not far-fetched.  He was a revolutionary in the digital age.  iTunes changed the way people purchased music, movies, and other digital media.  Don't want to shell out for an entire album just so you can own one or two songs?  For either 99 cents or $1.29 a pop you can buy only the songs you want.  When the iPhone came out in 2007, I knew it was only a matter of time before it would come to dominate the smartphone market, or at least be the smartphone that everybody wanted.  I don't own an iPhone (I’ve never owned a smartphone), but I've witnessed firsthand the impact it's made in how my family and friends conduct their business and personal affairs in ways both big and minute.

Jobs is written, directed, and acted with appalling indifference.  The story of Steve Jobs, a larger-than-life figure and a distinguished visionary, is reduced by first-time screenwriter Matt Whiteley to a soap opera that only thinks it's deep and important.

Beginning in 1974, Jobs (Ashton Kutcher) forms Apple Computers with Steve Wozniak (Josh Gad).  With help from an investor (Dermot Mulroney), it grows exponentially.  But Jobs' inability to work with others, combined with his mindless waste of money and time on grandiose and unprofitable products causes the uneasy board members to force him out of the company he helped build.

The screenplay is as self-aggrandizing as it gets.  Every other line of dialogue is a pep talk, speech, or obvious universal truth about how people should live their life, conduct their business, or improve society.  The dialogue in the scene where Jobs, Chris-Anne (Ahna O'Reilly), and Daniel Kottke (Lukas Haas) use LSD is straight out of something you’d see in 1960s hippie movies.  "It's like a window into the world," says Kottke.  How very, very deep.

I was hoping somehow director Joshua Michael Stern had a good reason to cast Ashton Kutcher in the title role.  This is the same actor who did Dude, Where's My Car, Just Married, My Boss's Daughter, and Killers.  I haven't seen any of those movies, but I can reasonably conclude that based on their premises and ads that Kutcher is the last person I would accept as Jobs.  My suspicions were confirmed.  Try as I might, I simply could not buy him in the role.  I’m all for bold casting, and sometimes it works, but not this time.  After what I saw – a bland, generic performance – I came to the conclusion that Kutcher’s uncanny resemblance to the man is the only reason he was cast.

All of the lead actors look lost, except for Mulroney and J.K. Simmons, the only two who exude confidence.  Sometimes I can tell when a director has trouble guiding his cast or keeping them on the right note.  It's painfully obvious here that Stern failed them.  Almost all the actors walk and talk like they have to take the world's biggest crap.  It would be funny if it weren't so pathetic watching them struggle and embarrass themselves.

Stern adds a few dollops of pretension to the already grueling film.  The sequence where Jobs and his new team create a set of motherboards reeks of emotion-influencing pop music, slow-motion, and arrogance.  Some scenes are hard to decipher because of the heavy use of technology and stock market jargon.  It probably sounded "cool" when written, but I might as well have been a non-English speaker listening to two people speaking English.

Jobs is insultingly bland and prosaic.  It fails on many levels, doomed from the very start.  It's a film that simply should not have been made.  Steve Jobs may not achieve immortality like Benjamin Franklin and Thomas Edison did, but I'm reasonably confident he will be remembered 100 years from now.  Jobs will be long forgotten before the end of this year.