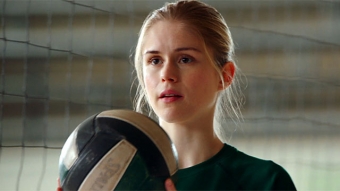 April 4, 2018 (San Diego) - I’m a sportswriter who doesn’t know anything about volleyball.  Kind of pathetic, I know.  Of course I know how it’s played, but I don’t know the logistics of scoring, etc.  That’s why you won’t see any college or prep volleyball recaps on here.  But as a sports reporter and fan, of course I love a Cinderella sports story.  The Miracle Season was all of that and more.

The film is a true story about the Iowa City West High girls volleyball team’s amazing 2011 season.  After losing their star player, Caroline “Line” Found (Danika Yarosh), in a tragic car accident, the girls lose their identity.  They don’t want to practice and they don’t want to play.  But one girl, Line’s best friend Kelly (Erin Moriarty), inspires the girls to play because “it’s what Line would have wanted.”  She eventually becomes captain.  She’s the main star of the film, alongside the girls’ coach, Kathy Bresnahan (Helen Hunt, who really shines in the role).  Coach “Bres,” as she’s called, struggles emotionally after the loss of Line, but eventually is able to gather her feelings and deliver an inspiring speech on the bus to the state championships, where the girls rally around her.   The girls win the state championships for the second year in a row.

The great thing about this film is that we hear this story so much in real life:  an athlete on a team dies and a team is inspired to win it all.  So this technically should be just another feel good sports movie.  But we just hear those stories in the news; we don’t actually live it.  This film makes you live it.  You’re a part of this community.  You’re wearing a Live Like Line shirt just like the people in the film.  When the ball hits the ground in the final set at the state championship to give the Women of Troy the win, you’re shouting “YES!” like I did in the theater.

While I don’t think Yarosh and Moriarty have a lot of acting experience (their lines at the beginning of the film felt like forced acting), Yarosh makes Line such a lovable character.  She’s funny, a prankster (she tries to shove two pieces of pizza in her mouth, which honestly?  #Goals) and her and Kelly’s friendship is real (the beginning of the film shows them playing together as little girls at Line’s family farm).

Speaking of Line’s family farm, a thing I need to talk about in this film is Ernie Found, Line’s dad, played by William Hurt.  The entire team, school and community suffers because of Line’s death, but I think the character that suffers the most is Ernie.  He loses his daughter and his wife Ellyn (Jillian Fargy) dies almost immediately after.  Out of all the characters in the film besides Bres, Ernie is the one that pulls Kelly and the rest of the team through.  He becomes the team dad in a way, making the Live Like Line shirts and eventually mustering up the courage to start going to games again.  The girls don’t look at him as “our friend’s dad” like most high school kids look at their friends’ dads; they see him as a friend and a mentor.

We also need to talk about the other adult role model in this film:  Bres.  As a sports fan, I know the struggle of a coach who has to choose between staying strong for your team and breaking down emotionally during a time like this.  But I think in the end, Bres realizes that it’s okay to do both.  It’s okay to lose yourself because that’s how you find your strength.  That’s what Kelly has to realize too as a captain.  She lost her best friend, but she has to stay strong for her team.  Kelly and Bres have a lot in common, I think, in that they don’t have a lot of confidence in themselves, but they learn that they have to Live Like Line and be inspirations for their teammates/players. 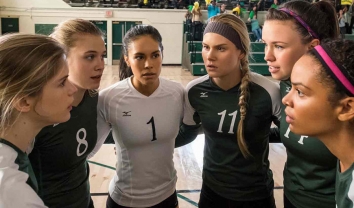 The only flaw in this movie was the girls’ reaction after their first loss.  Uhhhh you just lost and you’re laughing and giggling in the locker room hitting each other with towels???  Just a sports fan’s pet peeve.

Also a bad thing about this movie:  don’t let it fool you into thinking that many people willingly go to high school volleyball games.  At least at my high school, no one went to volleyball games for the boys or the girls except parents.  And our teams were pretty good (Rancho Bernardo Broncos for life!).

Overall, this is a great film about a sport that doesn’t get a lot of attention at any level, let alone high school, even when the Summer Olympics come around every four years.  Don’t get me wrong, football, basketball and baseball Cinderella story films are all well and good, but I think this film will open up viewers to the sport of volleyball and how much hard work goes into it.  It’s not just jumping up and hitting a ball over a net.  It’s supporting your teammates in triumphs and in losses.