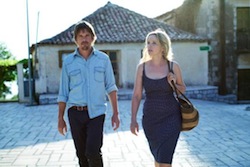 May 31, 2013 (San Diego) – January saw the release of 56 Up.  That film was the latest in a unique documentary series that began in 1964, in which Michael Apted interviewed a group of 7-year old kids from disparate backgrounds.  The project became literally a lifelong labor of love, as Apted has revisited these people every seven years.

Five months later, San Diego screens are blessed with Before Midnight, the third film in a series that may or may not have been inspired by the Up documentaries, but feels very much like a fictional version of them.  To watch Before Sunrise, Before Sunset, and Before Midnight is akin to imbibing a bottle of fine wine that has gotten better with each nine-year passage.

The Before series began in 1995, when American Jesse (Ethan Hawke) met a beautiful French lady Celine (Julie Delpy) on a train.  They spent the evening and night – Jesse’s last before leaving for the States the next morning – wandering about Vienna getting to know each other, talking about various subjects, and falling in love.  Nine years later, Jesse returned to Europe on a book tour and reunited with Celine.  It turned out Jesse got married and had a son, but the spark between his wife wasn’t the same as it was with Celine, his true first love.  It ended with Jesse opting to stay with Celine in Paris than go back.

Before Midnight reveals that Jesse still lives with the love of his life, is now divorced from his wife, and now has twin daughters with Celine.  The two are relatively happy until Jesse feels he’s missing out on his son’s life and desires to move back to the United States.  Celine feels otherwise, and several other tension-causing issues threaten to doom the relationship.

Set in Greece, director Richard Linklater uses wide lenses, wide shots, and long takes to create a romantic backdrop the same way he used Vienna and Paris in the previous two films.  Greece is sunny and shiny with diffused and rustic colors and lighting.  The countryside is wide open, the city quaint and quiet.

Movie speech is almost always as polished as a newly waxed floor.  That’s no criticism at all, just an observation.  A waxed floor isn’t a bad thing, and neither is a well-written screenplay.  The dialogue in the Before films is smooth, but in a different way.  It’s spontaneous, natural, and flows the same way words come out of an average person’s mouth.  It’s this quality that makes these films stand out because Jesse and Celine don’t speak like movie characters.  They talk like real people.

Jesse and Celine never had anything to argue about in Before Sunrise and Before Sunset; remember that in the former, they had only one night together and in the latter it was a happy reunion.  But now that these two have been living together, things are not exactly what they used to be.  Sure, they’re happy, until they hit a rough patch, but there was something about the possibility of never seeing one another again after enjoying the best night of their lives that made the relationship most romantic.  Now that their fantasy of actually fulfilling that relationship is realized, that magical day in Vienna grows more distant with each passing year.  The conflict that develops between the two is as natural and realistic as one would expect in a Before film.  Celine doesn’t have to portend it early on to give the audience the sense that things are beginning to fester. This conflict is full of emotion.  Unlike most movie conflict, this emotion comes from within.  They don’t scream or say hurtful things, although they let them each other know exactly what’s on their minds.

This sequence is significant for two reasons.  Number one, it was a heated argument between a German couple then twice their ages that caused Celine to move from her seat on the train to one near Jesse, which set in motion the long-lasting relationship.  Number two, now that these two lovers are now around that couple’s ages, they can now fully understand what they were going through after having lived together for so long (even though they couldn’t understand a word the German-speaking couple said).  It’s hard to watch not because of what’s said or felt, but because of the anxiety of not knowing whether the relationship will survive or end.

The performances have evolved much the same way as the characters, themes, and everything in between.  Ethan Hawke retains his character’s youthful optimism and vitality, but their luster has decreased somewhat with age and maturity, but not too much.  Julie Delpy, reserved 18 years ago, now exudes confidence, and her personality has never been any more outgoing.  These two talented actors consistently find a way to keep their characters fresh, spontaneous, and evolving with each film.

Richard Linklater likewise has something new to say and do, which means this series never gets stale.  This is one of the few film franchises where no one film is better than the others.  Instead, they are each unique and incomparable to the other.  In Before Sunrise, it’s young love at its purest.  In Before Sunset, the characters are mature, have experienced more in life, and are nostalgic.  Before Midnight tackles the crossroads of middle age.  I hope this isn’t the last we’ll see of Jesse and Celine.

Before Midnight is now playing in limited release in San Diego.