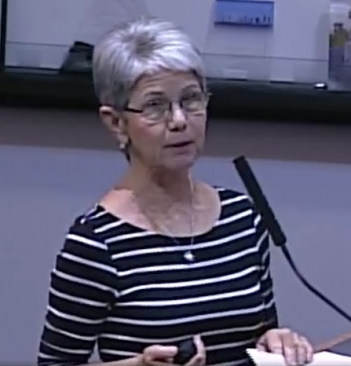 “Now that the property is for sale, redevelopment is inevitable,” said Susan Wayne last week on behalf of residents who were successful in scuttling the proposed development, at least temporarily.  “We are not opposed to a residential development, but to a parking variance that deviates from the La Mesa Municipal Code,“ she added.

At last week’s Council Meeting, Mayor Mark Arapostathis and Bill Baber voted no, while Council members Kristine Alessio and Guy McWhirter voted to allow the development, and Colin Parent recused himself because of his proximity to Little Flower Haven.

State law, under a density bonus, allows a property owner to relax otherwise required development standards in exchange for setting aside 10% of the units designated as “affordable,” or within reach of those earning 80% of the area’s median income.

It was a packed City Council meeting.  Residents sited safety concerns including narrow streets in surrounding neighborhoods, many as narrow as 29 feet without sidewalks.  Residents of the new development having to cross four lanes of traffic, 1 turning lane and two parking lanes without a crosswalk.

Many homes in the adjoining neighborhoods, built following WWII, have only a one-car garage and residents park a second vehicle in front of their house. This is already difficult with La Mesa Village employees and customers parking in the residential neighborhoods, claimed residents.

The developer commissioned three parking studies and disputed that there is a parking issue, to jeers from the crowd.

The developer offered to restrict parking in their leases to Porter Hill Road, Randlett Drive and Rosehedge Drive to alleviate parking concerns. He also agreed to change the species of trees at the development to protect existing views of neighbors to the south, design site grading to mitigate existing drainage issues, add a privacy fence and beefed up trees to accommodate neighbors to the west. 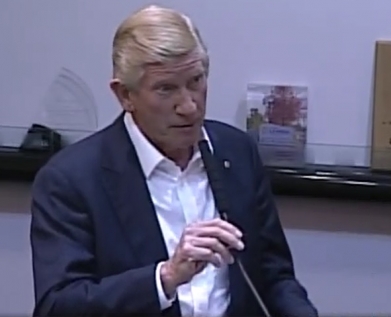 Ian Gill, on behalf of the developer, stated that this project, behind a bus stop just half a mile from the La Mesa Boulevard trolley station, is a prime location for a transit oriented development.

“This could not be more in the mold of a transit oriented project and so we felt that the reduced parking allocation that would go with that designation was entirely appropriate for this project and given the constraint of retaining the existing building and trying to work with that on this site that it was entirely necessary to go with that reduction,” he said.

The plan calls for retaining the central 1939 building exterior fronting La Mesa Blvd., the bell tower and chapel. Although the site is not designated as historical, Silvergate still wanted to preserve this portion of the building. They cited troubles associated with storm drains and other city infrastructure that runs under the property as prohibiting a denser development with a parking garage. Their plan calls for seven two and three story buildings.

The infrastructure running under the site already prevented the sale of the property to a different developer who had planned a denser development for the site. Although the state density bonus would allow for 166 units on the site, Silvergate’s plan calls for 130 units, while its current zoning under the La Mesa Municipal Code would allow for 138 units.

Silvergate said their development would provide new customers for local businesses, $20,000 in impact and permit fees per unit to go to schools, parks and recreation, public facilities, traffic impact and police and fire, as well as $400,000 a year in property taxes, 40% of which, or $160,000 a year, would go to La Mesa schools.

The Development Advisory Board reviewed the project and issued a Certification of Action that was signed off by the Engineering Department, the Fire Department and the Building Department. The Design Review Board and the Historic Preservation Commission also issued Certifications of Action.

La Mesa’s City Manager Yvonne Garrett defended City Staff on the Design Review Board (DRB), telling East County Magazine “Yes, there are two professional city employees on the DRB. But, no, the membership does not constitute a conflict. The DRB was constituted in 1987 with three outside professionals and two staff from Community Development on the board. Their mission is to review and approve development plans for compliance with the Urban Design Program, and make recommendations on development proposals and other design-related issues as directed by council.  The intent of adding City staff to the board was to provide background on the culture of design within La Mesa’s existing built environment. The design professionals on the board are often not residents of La Mesa and City staff provide another perspective for consideration in the deliberations.”

Silvergate sent a letter to La Mesa following the deadlock in which they state “We request that the City Council immediately vote to reconsider your decision not to ratify the decision of the City’s Design Review Board (‘DRB’). If you do not, Pathfinder will immediately file a lawsuit. We believe such a suit would prove to be very costly for the City’s voters and taxpayers.”

The Council met in closed session Wednesday to discuss the pending litigation.