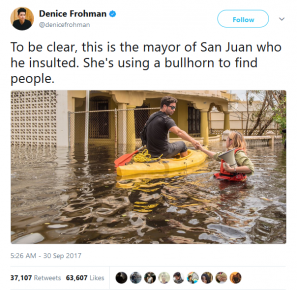 October 1, 2017 (Puerto Rico) – Nearly two weeks after Hurricane Maria devastated Puerto Rico, a U.S. territory, a military hospital ship has not yet arrived while the death toll continues to mount.  Only 10,000 National Guard members have been deployed, compared to 31,000 swiftly sent after Hurricanes Irma and Harvey struck Florida and Texas. There are also far fewer FEMA personnel, CNN reports.

Around 3.6 million American citizens live on the island, many trapped and running out of food and water.  Roads and electric infrastructure are largely destroyed. Power has been off for the entire island including hospitals; electricity is expected to be out for months in some areas.  At least 33 people have already died, including some insulin-dependent diabetics who could not keep their life-saving medications refrigerated.  It’s feared the number of dead will climb as access is gained to remote areas where communications have been cut off and people have been left without access to food or clean water.

President Donald Trump blocked foreign ships from bringing aid or helping with evacuations until nine days after the category-5 hurricane hit Puerto Rico, finally waiving the Jones Act under public pressure.  See Washington Post report. He had waived the Jones Act immediately for Hurricanes Irma and Harvey. The Jones Act, part of the 1920 Merchant Marine Act, prohibits any vessel not owned, built or partially crewed by the U.S. or its citizens from transporting cargo between points in the U.S.

Days ago, San Juan Mayor Carmen Yulin Cruz pleaded for help after Homeland Security Secretary Elaine Duke told CNN “I know it is really a good news story in terms of our ability to reach people” and said she was “very satisfied” with the federal response to Hurricane Maria survivors.

The San Juan Mayor fired back, “This is, damn it, this is not a good news story…This is a ‘people are dying’ story. This is a life-or-death story,” adding that truck 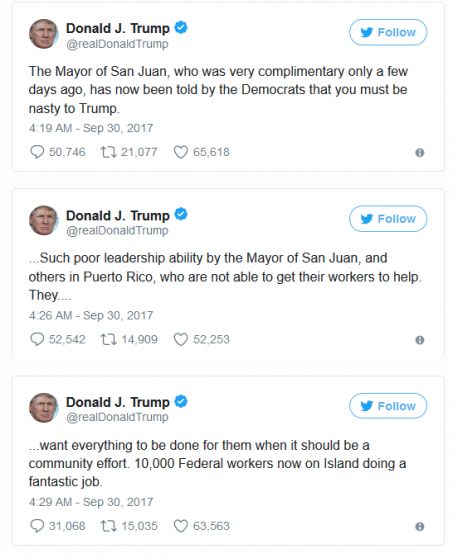 s could not get through on blocked or damaged roads to deliver vital supplies. She emphasized on Twitter, “PEOPLE ARE DYING!”

Trump lashed out angrily on Twitter, tweeting, “Such poor leadership ability by the Mayor of San Juan, and others in Puerto Rico, who are not able to get their workers to help. They want everything to be done for them when it should be a community effort.” Trump tweeted his insults while vacationing at a golf resort in New Jersey.

His staggering callousness amid the catastrophic drew swift and strong criticisms.  Denice Frohman tweeted a photo of San Juan’s mayor wading out chest deep to aid a man in a kayak on a flooded street. Frohman wrote, “To be clear, this is the mayor of San Juan who he insulted. She’s using a bullhorn to find people.”

(Images, left: Screenshots of Trump Tweets, which he has since removed off his Twitter feed.)

Lin-Manual Miranda, creator of the hit musical “Hamilton,” is of Puerto Rican descent.  He tweeted, “You’re going straight to hell, @Donald Trump.”  Miranda, in an article published in the Hollywood Reporter, has written about the plight of his own family in Puerto Rico following the hurricane that damaged their homes, left them stranded without adequate supplies and put his sister’s plans to take a medical school admission test on hold indefinitely. 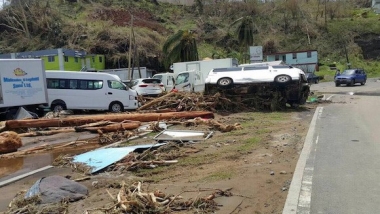 Republican Senator John McCain and Rep. Ron DeSanitis of Florida joined with Democrats in urging the President to waive the Jones Act. McCain, who has sought to repeal the Jones Act, called in “unacceptable” to force Puerto Ricans to pay “twice as much for food, clean drinking water, supplies and infrastructure” in the wake of Hurricane maria.

Democratic Senator Ed Markey tweeted, “First thing Trump should do on Tues when he visits #PuertoRico for the first time since #Hurricane Maria devastated the island is apologize.”

Belatedly more relief efforts are now underway. Royal Caribbean cancelled a cruise in order to send its cruise ship to Puerto Rico and evacuate some 3,000 people off the island. 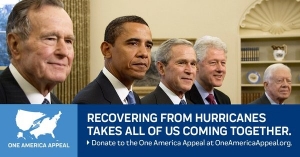 All five living ex-presidents have joined together to work toward relief for Puerto Rico:  Barack Obama, George W. Bush, Bill Clinton, George H. Bush, and Jimmy Carter.  Their appeal states, “Americans always answer the call.”  You can donate to help the people of Puerto Rico through their bipartisan relief effort at http://OneAmericaAppeal.org.

The response by the ex-presidents, setting political differences aside to show leadership during a national disaster, follow in stark contrast to the current White House occupant who scarcely even mention Puerto Rico days after the hurricane’s 160 mile an hour winds wreaked havoc, while he found time to Tweet criticisms of the NFL and players who knelt during the national anthem to silently protest racism in the U.S. – racism that to many, seems apparent and abhorrent in President Trump’s unequal response to hurricane victims in Puerto Rico, an island of Hispanic-Americans, compared to U.S. responses to hurricanes in Texas and Florida.

When I read this story full of factual errors I am reminded it's best to stay away from second hand reporting. Stick to local stories where you can verify the content. Re-telling news from other Alt-Left slanted sources makes you look bad.

In case you are referring to Trump's posts that he's since removed, above are the screenshots, which major media nationwide also reported on.

Every news organization on earth relies on second-hand sources especially for events not in their own communities. Your demand is not one that any professional media organization would do. Also your reference to quoting "alt left" sources is bizarre. The story above quotes only CNN, the Washington Post, and Twitter feeds for Trump and the San Juan mayor.  The only person posting "fake news" on this page is the poster above.

Our new rule will be to remove posts accusing us of being fake news or claiming facts are wrong, unless you can be specific about which facts you are questioning, and provide some documentation to show if we are in error.  If we have made a mistake we will correct it.  But 99.9% of the the time when someone makes such accusations they are totally false and that is defamatory.

Posters who repeatedly violate these rules will be banned.

Please make note, and follow these rules respectful of others. Thanks.