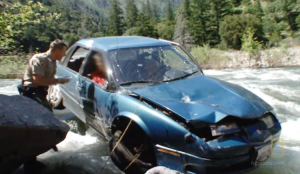 April 23, 2015 (Sacramento)--Six wildlife officers from the California Department of Fish and Wildlife (CDFW) were awarded the California Medal of Valor, the state's highest honor. The six are among 52 state employees receiving the medal for demonstrating extraordinary acts of bravery and heroism in order to save the life of another.  Governor Brown's Executive Secretary Nancy McFadden presented the awards at a ceremony today.

"All of our officers are trained and ready to take on any challenge while working in a remote county, on a river or the ocean or patrolling in an aircraft,"said CDFW Chief of Law Enforcement David Bess. "The officers whose actions are being recognized represent the integrity of the entire CDFW force and we are very proud of them."

There are more than 400 wildlife officers responsible for protecting California's natural resources, often working alone on nights, weekends and holidays. They face many challenges as they enforce the laws relating to fish, wildlife and habitat within the state and its offshore waters.

The following officers are being recognized:

Crew of the Patrol Boat Bluefin

After a 15-minute dash to the scene, they found the white hull of an overturned boat in the surf line and several people in 50 degree water, including two surfers who had paddled out to assist the victims. The crew could see the surfers taking turns holding up four of the five victims. Both surfers and victims were nearing exhaustion and waving frantically for help in the 12-foot waves.

With no real training on how to affect a rescue of that nature within the surf zone, the entire crew risked themselves to save lives.

Huckins backed the Bluefin just off the surf line, while Combes and Ewald launched a rigid-hull-inflatable skiff. They maneuvered into the surf zone riding the backs of the swells, and managed to pluck three of the victims from the water. They rushed them back to the Bluefin before returning to locate the other victims, but none were found. Huckins and King recognized that all three victims were in advanced stages of hypothermia after having struggled in the frigid waters for almost 45 minutes, and got the men into the crew's survival suits for added warmth. The men were then airlifted by helicopter to a nearby hospital.

The two surfers had managed to get one victim to shore, but sadly a fifth victim drowned.

The rescued victims later visited Huckins. One of them told of becoming so exhausted he could no longer stay afloat -he sank once, then fought his way to the surface for what he knew would be his last breath, and as he began to sink for the last time, a wildlife officer's hand came "out of nowhere"and pulled him to safety.

On June 17, 2011, Wildlife Officer Kyle Kroll was patrolling the North Fork of the Feather River when he heard a 911 call over the county fire department radio. A vehicle had gone over a ledge and into the Feather River. Kroll was only five miles away and the nearest other rescue personnel were 45 minutes away.

Kroll arrived on scene and saw the vehicle was off a steep embankment and resting precariously on a rock in a section of the river with dangerous rapids. A severely injured husband and wife occupied the vehicle. Kroll determined he could not risk moving either passenger as the weight shift would have caused the vehicle to slip into the river. Kroll provided first aid and relayed pertinent information to emergency responders who were still many critical minutes away.

Kroll then secured the damaged vehicle with a tow strap and chain from his truck. He carefully waded into the swiftly moving river and attached them to the front and rear axles of the car. Assisted by a PG&E worker, Kroll tied the strap and chain to a tree and a rock in order to stabilize the vehicle and prevent it from falling into the river.

Rescue personnel and California Highway Patrol officers then arrived on scene. Because of the continued risk of the vehicle falling into the river, they provided Kroll with another chain, and he again went under the car and attached it to the axle, then to a tree. Only after securing additional straps and cables could the team work to extract the victims from the car and get them to safety.

On July 24, 2013, Lt. Tony Spada was off-duty, riding his mountain bike on the south side of Ash Slough in Madera County. A woman ran from the bushes alongside the slough shouting, "My baby was swept away, help me!"  Despite the fact he had no rescue equipment available, not even a life jacket, Spada dropped his bike, surveyed the scene and dove into the slough. He swam with the current approximately 50 to 70 yards downstream where he found two small girls hanging onto a branch to keep from being swept under a section of the slough with dense vegetation. Spada swam to their location and found it too difficult to rescue both children at the same time.

He located a safe exit point on the opposite side of the slough. Taking the smallest girl first, he placed her arms around his neck and  proceeded to swim her across the slough to safety. He exited the waters, ran up stream and dove back into the water to rescue the second child in the same way.

Spada escorted the children over to officers of the Chowchilla Police Department who were waiting nearby. Both girls were treated for a mild case of hypothermia and shock.

Without Spada's heroic actions, there is no doubt these two young girls would have lost their lives.

On Oct. 12, 2012, Wildlife Officer Arthur Golden was driving home from training when he came upon a vehicle accident near Corcoran. A small pickup truck had gone off the road and down a steep embankment.

A bystander reported that the victim was pinned in the vehicle and not breathing. Golden quickly checked on the driver, then radioed for help at his vehicle and went back down the hill to the heavily damaged vehicle. Inside, the driver was unconscious and bleeding. The truck was perched precariously on a slope and ready to slide down, potentially rolling over.

Putting himself in great jeopardy, Golden reached through the smashed driver's side window to assess the victim's injuries and provide immediate medical care. While Golden was half-inside the truck, it slid several inches down the hillside. Golden pulled the driver toward him to relieve the pressure on the downside truck door and stabilize the vehicle from rolling over onto both of them.

Shortly after, local fire and rescue arrived and fully extracted the man from the vehicle and got him to safety.

Video and high resolution photos of the wardens are available at ftp://ftp.dfg.ca.gov/oceo