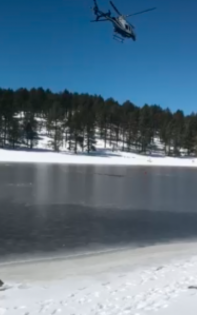 February 25, 2019 (San Diego’s East County) – A man who fell through ice on Big Laguna Lake while attempting to snow ski on the frozen water yesterday was rescued by a Sheriff’s helicopter.

The Sheriff’s A.S.T.R.E.A. 1 helicopter responded from the east side of the Cuyamaca Mountains, reaching the lake at noon, four minutes after a rescue call came in to dispatch.

A.S.T.R.E.A. 11 was also requested through Monte Vista Fire Dispatch to assist with a possible hoist rescue.

Soon after, the first helicopter found the man “in the middle of the lake, where he was trying to keep his head above water and struggling to hold onto the ice,” says Sgt. Scott Bligh. The second helicopter landed nearby and reconfigured the helicopter to use a LIFE 1 Rescue Quick Collar, or flotation device.

A.S.T.R.E.A. 1 hovered and dropped the collar, where he was able to grab onto the self-inflating rescue strap. The helicopter then pulled the victim across the ice approximately 75 yards to the shore.

Citizens helped the man strip off his wet clothing.  Hikers provided dry clothes to the snow skier, who showed signs if severe hypothermia.

He was flown aboard A.S.T.R.E.A. 1 to a nearby landing zone off Sunrise Highway, then transferred to an air medivac, R.E.A.C.H. 21 helicopter and flown directly to Sharp Grossmont Hospital.