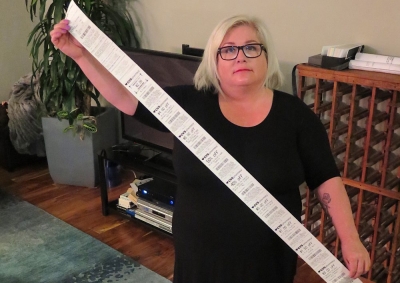 Photo:  Carol Dahmen poses with a receipt that's more than 4 feet long—for the purchase of a single item. Photo via Kevin Eckery for CALmatters

March 22, 2019 (San Diego) - When Carol Dahmen discovered the CVS receipt draped across the counter of her Carmichael kitchen, she couldn’t resist pulling out her tape measure to document it.

Her husband had purchased one single prescription. The receipt, she discovered, stretched on to contain 11 coupons before topping out at an astonishing 4 feet 8 inches—the height of Olympic champion gymnast Simone Biles.

“This receipt is ridiculous and unnecessary,” Dahmen tweeted, endorsing the idea of scrapping paper receipts for emailed versions.

California lawmakers are considering just such a proposal— a bill by Democratic Assemblyman Phil Ting of San Francisco that would make emailed receipts the default for businesses grossing more than $1 million beginning in 2022. Businesses breaking the rule could be fined $25 a day, up to $300 a year. Customers could still get a paper receipt, but they would have to request one—which some would undoubtedly do, rather than share their email addresses with many merchants.

The state already bans single-use plastic bags and this year, mandated that plastic straws be available by request only. If the default e-receipt bill passes, California would once again become the first in the nation to crack down on another ubiquitous product of modern existence.

Receipts increasingly are made of thermal paper, and thus printed without ink. A chemical sometimes used to coat thermal paper, Bisphenol A (BPA), mimics estrogen and has been linked to cancer; in 2012, the U.S. Food and Drug Administration banned its use in baby bottles. Receipt paper now more commonly contains Bisphenol S (BPS), a replacement for BPA that some recent studies, including one from UCLA, indicate may be just as harmful.

Opponents say this is yet another hurdle for California small businesses, and a privacy concern for customers.

“It’s trying to reduce paper waste and that’s commendable, but we just want to make sure that in the process we’re not creating a big digital trail for everyone who goes into a drug store,” said Bennett Cyphers, a staff technologist at the Electronic Frontier Foundation, a nonprofit digital rights group. “If the business needs to collect some kind of contact information, what do they do with that data? It’s going to be a field day for data brokers, data about what people buy and who’s buying what and when. We’d really like that not to be the case.”

Receipts account for millions of pounds of trash waste, and an estimated 9 billion gallons of water, according to Green America, an environmental group supporting the bill.

“We don’t really need to use that paper and definitely that water,” Ting said. “We can really save those resources for something else.”

Advocates say Ting’s bill is an easy remedy. “It’s tackling one of the lowest hanging fruit,” said Nick Lapis, director of advocacy for Californians Against Waste.

“I’m open to the idea of doing away with paper receipts, but right now this bill only applies to businesses and not the state government,” he said. “We should also have a conversation about what to tell the folks who aren’t very tech savvy, or who otherwise don’t have access to internet services.”

But some say the bill could burden businesses in more rural parts of the state. Just 59 percent of rural households have broadband internet access, according to a report by the Public Policy Institute of California.

Dahle contends that counties in his district also don’t have the infrastructure in place to rely that heavily on the internet. He said his wife ran a plant nursery and while the business had internet, the connection was weak.

Data breaches might make customers hesitant to dole out their email. Prominent business chains such as Chipotle and Whole Foods have experienced data breaches, as did Target, impacting 41 million customers.

“Our emails have been shared with the world and I don’t like that,” Dahle said. “At the end of the day, there are a lot of us who don’t want the whole world having our email.”

For those hesitant to surrender their emails to every business they patronize, Ting said customers could simply request paper receipts.

Other opponents say the bill would make it harder for customers to locate proofs of purchase.

“Unlike other retailers, we’re subject to this state law where we’ve actually encouraged people to bring in their own bags or not use bags,” said Aaron Moreno, the senior director of government relations for the California Grocers Association. “We need to have a way to tell whether someone has bought something.” 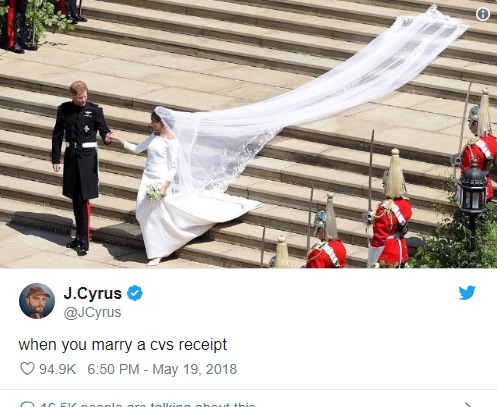 As other retailers go, CVS is easily lampooned for printing human-sized proofs of purchase—and not just by Dahmen, a political advertising consultant who isn’t working on Ting’s bill. Customers have shared countless memes about the practical uses they have discovered for their voluminous CVS receipts (an Ohio man unfurled one as a replacement for a missing strip on the vertical blinds in his bedroom) and obscure facts about CVS receipts (“the sun is approximately 8 CVS receipts from earth”). Then there’s this (right):

While the company does allow customers to receive electronic receipts upon request, many customers are not aware of that option or may not want to use it.

Last year, a CNBC reporter put the CEO of CVS on the spot while pulling out her own voluminous CVS receipt.

“What are we going to do about this?” CNBC’s Bertha Coombs asked.

So if you get an electronic one you now have to use your own printer paper and ink to print copies -- that's if you don't miss the receipts amid a deluge of email, or have one get sent to a wrong address or spam folder. This is a really bad idea.

Physical, electronic...it's going in the trash either way lol