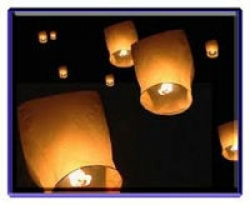 June 6, 2014 (San Diego’s East County) -- With tinder-dry conditions during the drought, Fire Chief Rick Sitta at Heartland Fire & Rescue is warning residents about the dangers of sky lanterns.  “These fire lanterns pose a serious threat to our county,” the Chief says.

Sky lanterns are prohibited by several laws and codes in California. The ban followed a bulletin from the State Fire Marshal in 2012 warning of their dangers.  The Fire Marshall issued that bulletin in  direct response to an East County Magazine investigation following a complaint from one of our readers. That led to first a ban on sky lantern sales at Walmart in Lakeside, and then after we alerted Cal Fire and the San Miguel Fire Department, the State Fire Marshall took action.

But many people don’t know that sky lantern sales are illegal here, and use of the dangerous products continues.

A  sky lantern is a small hot air balloon made of paper with an opening at the bottom where a small fire is suspended. The heated air from the flame causes it to rise into the air and be carried off by the wind. “The problem is that once released, there is no control over where the lantern lands,” said Chief Sitta. “It could land in trees or bushes, on hillsides, in canyons, or on someone’s home.”

Sky lanterns have grown in popularity over the years due to movies and commercials. They are often seen at weddings and vigils. Invented in China, the lanterns were first used as signals during wars. They are now launched at festivals for good luck and to send wishes skyward.

Chief Sitta is discouraging the use of sky lanterns, at any time, especially during the 4th of July in the midst of fire season.

The U.S. Fire Marshal’s Association has also adopted a resolution urging states to ban the sale and use of sky lanterns.

There is a serious fire and safety hazard associated with sky lanterns. The potential to start an unintended fire on or off the property from which they are released cannot be overlooked. Sky lanterns have been the cause of commercial, residential, and wildland fires worldwide.

As our last sentence states, there have been quite a few. Here's a doozy: On 1 July 2013 the 'largest fire ever' in the West Midlands of England, involving 100,000 tonnes of recycling material and causing an estimated six million pounds worth of damage, was started by a sky lantern which landed at a plastics recycling plant in Smethwick. Images of the lantern starting the fire were captured on CCTV.[10][11] In response to the fire, Poundland decided to stop selling sky lanterns and recalled their entire stock on 6 July 2013. Besides causing fires, they cause dangers to aircraft. One city in China banned them after dozens of flights had to be delayed.
OK, then. Ban cigars and cigarettes and matches and campfires, and birthday cakes and.... Cite a fire started by a sky lantern. World wide. Just one.