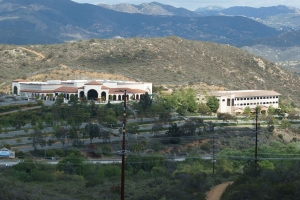 September 25, 2018 (Rancho San Diego) – The Valle de Oro Planning Group has voted 12-2 on September 4th to oppose a proposal by Skyline Church to build a senior living facility on 9 acres of open land  north of Highway 94 in Rancho San Diego.  Planners and long-time community residents say that when the evangelical megachurch was built, church leaders promised the county to preserve this site as open space.

The church first proposed the senior facility back in 2006, initially denying any agreement to protect the land—until planning group chair Jack Phillips produced a 1996 letter from church officials promising to restore coastal sage scrub habitat and preserve the land as open space, the San Diego Union-Tribune reported in 2006.

But now church officials are claiming the preservation agreement was not part of the project packet approved by Supervisors in 1996.  Executive Pastor Dan Grant says there is “widespread support” for the senior housing project, which would include a mult-story main building with 147 assisted living units as well as 75 independent living units, five detached duplexes with 10 additional independent living units, as well as dining halls, pool, gym, exercise facilities and more.

A report prepared for the church by REC Consultants Inc. found the project would significantly impact sensitive species including the orange-throated whiptail, California gnatcatcher, Palmer’s goldenbush, San Diego Sunflower and foraging habitat for birds of prey.  The church wants to mitigate this loss by preserving land on the south side of the freeway.

The project has drawn opposition from the Sierra Club, which finds the proposed mitigation inadequate, and also asserts that the climate change analysis was cribbed from another document and refers to Valley Center.  Sierra Club also objects to the possibility for the church to mitigate green house gases outside the area, not locally, which it contents is “inconsistent with the County’s General Plan,” according to comments submitted by George Course, Conservation Chair of Sierra Club San Diego.

Gary Westergren, a local resident, contends that “someone at the county was not doing their job and did not file all the paperwork to properly put all of the reserved green space into an easement,” adding in a post on a local community forum, “Now Skyline wants a cash cow.” He calls the proposal to develop he property “deceitful” adding, “Is this what Jesus would do?”

Patricia Ryan, first vice president of the Grossmont-Mount Helix Improvement Association, also submitted a letter advising that the G MIA board has taken a position against the project.  “At issue here is the future of our rea and the will of the people to preserve it the way it was intended to be when people bought homes and helped build a community out in Rancho San Diego,” she writes, adding, ““The proposal violates the notion that a promise to hold lands open is final.”

Ryan predicts that the project could set a “dangerous precedent” because ““any time a developer wishes to build on Open Space, this decision, if the county approves the church’s retirement facility, will be used to demonstrate that it can be done, and quite easily. Soon Rancho San Diego will start to resemble Orange County or Los Angeles.”

The church is seeking to rezone Open Space Conservation zoning to Village Residential 30 to allow the project, for which Skyline Pastor Dan Grant says there is “widespread support,” the San Diego Union-Tribune reports.  The church seeks to meet the needs of aging parishioners in its nearly 4,000-member congregation.

Dan Grant knows that the land was slated to be preserved. Skyline's master plan was to put a retirement complex on the land that they sold to the sherif department. Dan Grant & Jim Garlow will lie through their teeth to push their agenda's at any cost. They are still trying to recoup all the money they wasted when they built their first building. Maybe don't sell off your property and then try and manipulate the system to try and make a extra buck. RSD does not need another old folk home! There are at least 2 within a couple miles! Don't trust Dan Grant, Jim Garlow, Or Skyline!
Does anyone remember when honesty and justice were part of the Christian message? Now it is hide-the-pedophile-Priest, break promises for money in big real estate deals for megachurches and preventing investigations of all kinds of rape-y-ness to rush a frat boy onto the Supreme Court. I still know many Christians who participate in genuine good deeds, but sure look the other way on the corruption and sex abuse. Greed over Creed I guess.

Yeah you need sources for EVERY single one of those claims, buddy.  Like me.  See?  Here I go:

>preventing investigations of all kinds of rape-y-ness to rush a frat boy onto the Supreme Court.

uhhh how are...WE behind this...?  Because last I checked, that was Trump.

>Does anyone remember when honesty and justice were part of the Christian message?

I believe the planning group saw through the lie by exactly 12-2.
As the Developers/Government Officials continue their mantra of build, build, build, you will see this more and more. Rezoning of our dwindling open space to allow housing or whatever they want. Housing was needed and zoned at I-8 and Lake Jennings, but the Developer got the County to agree to change it from residential to commercial, despite the fact that a huge shopping center already exists a mile away (The developer is planning a shopping center) and area is surrounded by residential. I understand the desire of the Church, but you can't just decide to go back on your word/contract because years later you change your mind. That area does not need any more traffic-it is a major mess already.