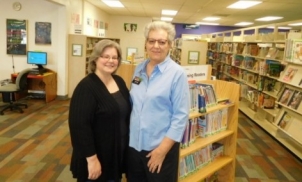 Goal of a new library still a long way from fulfillment

That was the message of the library branch manager Cheryl Cosart, who made a presentation on its services and programs May 10 to the City Council.

Mayor John Minto said he had no idea of the breadth of the services the small county branch was delivering, and thought the rest of the community deserved to know.  So he invited Cosart to give her a platform for the story.

“We were happy the mayor was interested and happier to let us tell our story to the community,” Cosart said. “We think we are doing well in meeting the expectations of the Santee community.”

The overarching theme Cosart told was of a library (now at 102 years young) that provides both a center to make connections, and for continued access to opportunities.

The population the library serves covers every age from infants hearing read tales, to toddlers doing sing-a longs, to teens playing Wii games, to seniors discussing the book of the month.

Last year, the library at 9225 Carlton Hills Blvd. that is open seven days a week registered 216,000 visitors, while offering 1,001 programs, sometimes as many as five in a day, Cosart said.

The library’s stretched- thin staff and dedicated volunteers would probably love to offer even more but the constrained facility of about 9,300 square feet simply can’t accommodate overlapping programs, Cosart said.

“Physically, there’s not enough space to hold all our programs so we have to layer them,” she said, referring to scheduling times so they’re not overlapping.

To address this issue, the Friends of the Santee Library launched a campaign in late 2016, hoping to inspire the city’s leaders to support a new, much larger local library.

As part of the campaign, the Friends have collected more than $130,000 towards financing a building that is estimated to cost at least $15 million. Much of the money came from sales at the Friendly Used Bookstore, located next to the library.

Chris Miller, the book store’s chairman, said sales last year were terrific as were the many donations collected at such public events as street fairs, plant shows, or through partnered events such as one the group did with Barnes & Noble last month.

Yes, they may be a long ways from the ultimate goal, but every journey has to begin with small steps, Miller says. Eventually, the hope will be that the city and county can strike some agreement on a property.

During his campaign, and subsequent election, Minto said creating a new library in tandem with community center was a priority.

Kudos to Santee's Council for recognizing and then prioritizing vital community institutions. With the Council leading, and citizen volunteers stepping up, Santee will one day provide residents with a level of library services commensurate to the city's needs. In adjacent communities, where the mismatch of existing facilities to population and service area is uncannily similar, the prevailing attitude at city hall is a shrug, or occasionally a sigh. Carry on Santee! And may your raising of the bar be a shot of tonic for your neighbors.