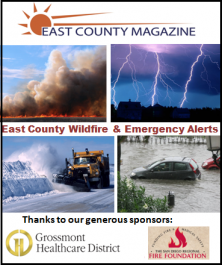 UPDATE: @Lambo_Gambo reported the "forward rate of spread has been stopped and fire is contained at 3 acres," around 5:30 p.m.

June 1, 2021 (Ranchita) - Wildfire watch cameras detected a possible wildfire roughly an hour ago, around 4:30 p.m., reported @huntefire and Cal-Fire was immediately dispatched. It turned out to be a small vegetation fire and was named the "Montezuma Fire."

@CALFIRESANDIEGO reported being on the scene at Montezuma Valley Road in Warner Springs, while @SDCountyFires reported it started in the 27900 block of Old Mine Road in Ranchita.

No structures are threatened, reported @SDCountyFires, adding, "SDSO reporting no winds in the area and that the fire is spreading south."