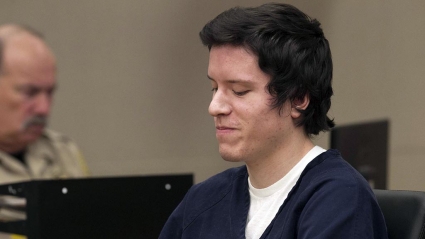 Photo:  John Earnest, shown during September 2019 court appearance, is a defendant in suit along with his parents. Pool photo

June 17, 2020 (Poway) - Brady United has opened a new front in the gun-control wars, filing a lawsuit that targets gunmaker Smith & Wesson and the San Diego shop that sold the firearm tied to the Chabad of Poway killing.

The suit filed late Monday in San Diego Superior Court on behalf of victims of the Poway synagogue also seeks relief from shooting suspect John T. Earnest and his parents.

It alleges “irresponsible and unlawful conduct by a firearms manufacturer and seller for making, marketing, or selling weapons in an unsafe and illegal manner” in connection with the rifle allegedly used by Earnest, 21, in the April 27, 2019, shooting.

The suit seeks monetary relief and an injunction demanding that all parties reform their business practices.

The suit filed by the gun control advocacy group accuses Smith & Wesson of failing to “use reasonable care” when marketing the rifle — a Smith & Wesson M&P 15 — and alleged the company made the weapon “easily modifiable,” which facilitates crimes like mass shootings.

Washington-based Brady Legal’s complaint also alleges gun store San Diego Guns unlawfully sold Earnest the rifle used in the shooting, as he lacked a valid hunting license to buy such a weapon at his age.

The suit also alleges Earnest’s parents “negligently facilitated their son’s (the shooter’s) ability to gain access to one or more pieces of weaponry/tactical equipment used in the incident, upon information and belief, having prior knowledge of his avowed, virulent anti-Semitism and propensity for violence.”

The California Department of Fish and Wildlife and Department of Justice are also named as defendants for alleged negligence in allowing Earnest to buy the gun when a background check should have precluded him from purchasing it.

The shooting resulted in the death of 60-year-old Lori Gilbert Kaye, who was shot in the synagogue’s foyer. Three others were injured, including the synagogue’s rabbi, Yisroel Goldstein, among several people listed as plaintiffs in the lawsuit.

In a statement Monday, Brady Legal Chief Counsel Jonathan Lowy said: “We do not have to live in an America where we are not even safe from gun violence in our places of worship, during one of the most important holidays of the year. The victims and survivors of this Passover shooting are bringing suit because they do not want another family or congregation, of any faith, to suffer as theirs did. Dealers should sell guns legally and carefully.

“Manufacturers shouldn’t design, market and sell assault weapons to attract and facilitate would-be mass shooters. We look forward to proving our case in court, and making these gun companies become part of the solution to gun violence, instead of part of the problem.”

Donna Vobornik, an attorney partner at Dentons, said: “We are hopeful that this complaint leads to meaningful and immediate change in the production, marketing and distribution of these weapons so that stories of devastation like this do not continue to play out. Our individual rights, including those guaranteed under the First Amendment, require bold defense when they fall victim to illegal guns.”

Late Tuesday, the executive director of San Diego County Gun Owners PAC told Times of San Diego: “What happened to the synagogue and those who attended is horrific. The lawsuit they are filing, in part, is asinine in that they are blaming the gun shop and manufacturer for the actions of a highly disturbed monster.

“The gun shop followed state law to the letter and communicated with the California DOJ flawlessly,” said Michael Schwartz, the group’s leader. “The hunting license presented in order to purchase the firearm was legal, legitimate, issued by California, contained all required information, and was unaltered so therefore was valid.”

He continued: “The manufacturer is no more to blame than Ford or Chrysler is to blame for drunk driving. They are also legally protected by the Protection of Lawful Commerce in Arms Act. This is settled law which makes naming them as plaintiffs frivolous. I hope the victims are able to find peace through other means rather than following the advice of those who only want profit.”

Earnest remains jailed on both state and federal charges for the shooting, as well as the alleged arson of an Escondido mosque, both of which are being charged as hate crimes.

Earnest allegedly told a dispatcher that he committed the shooting because Jewish people were destroying the white race and made similar anti-Semitic comments in an online manifesto in which he said he spent four weeks planning the attack.

According to testimony, a receipt found in Earnest’s car showed he purchased the rifle at San Diego Guns on April 13, 2019, the same day a California Fish and Wildlife card found in his bedroom showed he completed a hunting program, qualifying him for a hunting license.

However, the license — which would allow someone in California under 21 to purchase a gun — was not valid until that July. Without a valid license, Earnest would have been prohibited from purchasing the rifle under state law, as he was 19 at the time of the purchase.

In a news release, Brady United said it has represented victims of “gun industry negligence” for over 30 years, and has won over $60 million in settlements and verdicts in cases brought by Brady for victims and survivors.

A Bloomberg News Service story noted similarities between the Brady suit and one filed by Sandy Hook family members in 2014 against Remington Arms Co.