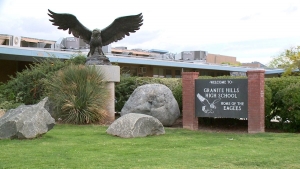 El Cajon Police Department removed the device, which was not deemed a threat, she added.

No injuries or damage were reported and fire crews were not needed, says Monica Zech, public information officer with the City of El Cajon. Police are investigating the incident.

The school was briefly placed in secure campus mode. This was already a scheduled minimum day for students, so students were released earlier than planned.