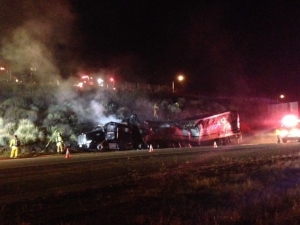 April 29, 2015 (San Diego’s East County)—A semi-truck burst into flames on I-8 near Lake Jennings Park Road in Lakeside on Thursday, turning its load of frozen meat into smoked pork.

10 News reports that a motorist noticed the blaze and motioned to get the driver’s attention.

The driver reported his brakes were on fire, shortly before realizing that his load, too, was in flames.  The driver managed to pull over and leap from the truck before the truck exploded, shooting flames 20 feet into the air, according to KNSD.

The flames also ignited a small brush fire, which charred a quarter acre along the highway before firefighters extinguished the blaze. Heartland Fire and the California Highway Patrol responded.

Trucking companies try to cut costs on maintaining their vehicles. Repairs are costly. Brakes on fire? The driver negligent or just dumb.