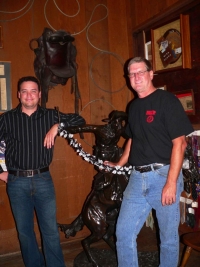 October 28, 2009 (Santee) – Pinnacle Peak, East County’s Western-themed steakhouse best-known for adorning its walls with ties cut from the necks of guests who violate the casual dress code, hosted a recent mixer for the Santee Chamber of Commerce that attracted a hungry crowd. If you haven’t been here in a while, you might be surprised at some of the changes. 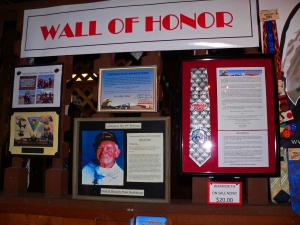 The original Pinnacle Peak in El Cajon burned down years ago, though a glass showcase in the center of the Santee restaurant features over 54,000 of ties salvaged from the fire. Another addition is a “Wall of Honor” featuring “warrior ties,” which guests can purchase for $20. Ties are then ceremoniously snipped and mounted on the wall, with proceeds benefiting American military personnel.

Or you can opt to wear your own necktie—and join the legions of diners through the decades who have left behind a snippet of their personal history –each labeled with the tie owner’s name and city, mounted like trophies on virtually every wall in the restaurant. 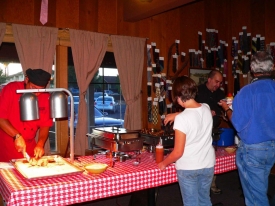 Guests at the Chamber mixer savored barbecued ribs, chicken and baked beans, along with a tasty dessert. In addition to vying for raffle prizes, Chamber members and guests concluded the evening by singing happy birthday to Chamber president Warren Savage. 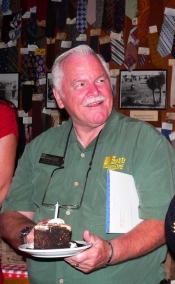