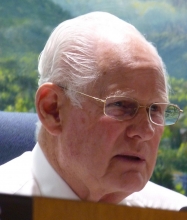 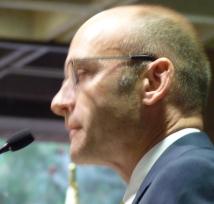 "I will support this in honor of my sister, and my mother and my father-in-law," -- Councilman Bob McClellan (photo, left), who lost all three family members to smoking-related illnesess.

"The American Revolution was about individual liberty...doesn't freedom to make a decision include freedom to make a poor one?" --Eric Anderson (photo, right), Rock Church and Caucus Chair for the San Diego Republican Party Executive Committee

June 12, 2015 (El Cajon) – El Cajon’s City Council voted 3-1 on Wednesday to send a letter asking Assemblyman Brian Jones and Governor Jerry Brown to support Senate Bill 151, which would raise the minimum legal age for buying cigarettes and other tobacco products from 18 to 21.

Jones has taken over $25,000 in campaign contributions from the tobacco industry.  East County’s State Senator, Joel Anderson, took nearly $40,000 and voted against the bill when it passed the Senate.

Councilman Gary Kendrick, author of the resolution, notes that tobacco executives have lied for years to Congress for years, claiming that tobacco products were safe and non-addictive. “Cigarettes are the only legal product that when used as directed, kills one in three of its customers,” he points out, adding that any other product would be banned with such a record.

Additionally, Kendrick points out that the tobacco industry places a tremendous financial burden on the health care system and taxpayers.

“I’d rather take that money that we spend trying to stop diseases that are caused by tobacco and use that money to build more schools, hire more teachers, help our roads, and feed hungry people,” he said, adding that savings could also be used to lower taxes. “I am a conservative. This is good fiscal policy.”

Kendrick previously authored El Cajon’s strict no-smoking in public ordinance, which was enacted in 2007.  The ordinance prohibits smoking on city sidewalk, outside office buildings; however, smokers can smoke in a designated area.

SB 151 would raise the smoking age to 21 statewide for all tobacco products including cigarettes, cigars, smokless (chewing) tobacco, hookahs and e-cigarettes that contain nicotine.

Representatives from the American Cancer Society, the Tobacco Control Coalition, the American Lung Association in California, the American Medical Association (AMA), the Communities Against Substance Abuse (CASA), Citizens Oversight, and  residents from the East County spoke in favor of raising the age limit.  A representative from Rock Church and the Republican Party spoke against, as did a military veteran.

The speakers in favor presented that the tobacco industry is targeting the young adult market. The main objective of SB 151 is to decrease the amount of preventable tobacco related deaths among the younger generation.

Those against the measure argued that it restricts liberties and discriminates against adults ages 18 to 21.

Linda Barbour from the American Cancer Society said the bill will “keep kids from starting smoking.” She cited economic impacts of smoking, noting, “There is an $18 billion toll from tobacco use--$487 per resident.”  The real cost of smoking isn’t the price of a pack of cigarettes, but rather $3.5 billion in medical care, loss of productivity and lives.

Barbara Gordon, Chair of the Tobacco Control Coalition, testified, “Each day, more than 3,200 people under 18 smoke their first cigarette…95% of U.s. smokers started before age 21.” She added that youths are vulnerable to images of smoking in media. Gordon praised the council for its strict ordinance regulate smoking in El Cajon. 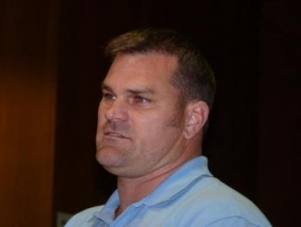 Jason Jackson, a military veteran (photo, left), urged a “no” vote.  He said he found it iron that one year after Eric Gardner was killed by New York Police for selling illegal cigarettes, the Council would consider this action.  “If you’re going to make something illegal, you must be willing to kill to enforce it,” he claimed. He feels the 21-year age limit is arbitrary and called the measure “paternalistic,” adding, “It’s age discrimination against a class of citizens you don’t fear retribution from. I find that unconscionable.”

Eric Anderson, Rock Church Citizen of the Year in 2012 and a former Caucus Chairman for The Republican Party of San Diego County’s Executive Committee, now the Republican Liberty Caucus Chair,  spoke against the proposal from a conservative Christian perspective.

“A man cannot tell a neighbor whether he can smoke, and neither can a legislator,” he said.

Anderson noted that Prohibition did not stop people from drinking alcohol and what’s needed is “greater character” which comes from the family and churches. He argues that Karl Marx and Friedrich Engel have done more harm to citizens than tobacco, but that he would not want to ban reading their books. “The American Revolution was about individual liberty. We are not allowed to do evil so that good may result,”  he said. "Doesn't freedom to make a decision include freedom to make a poor one?" Finishing his argument, Andersons stated, “Freedom comes with a risk…we don’t use force to change our neighbors, we use love.”

Kendrick countered the contention that we shouldn’t regulate harmful substances. “Taking that argument to an extreme would mean legalizing heroin,” he pointed out, adding that smoking is “inherently dangerous.” He noted that those opposing the measure “take a lot of money from tobacco companies. To me, that’s blood money.”

Debra Kelley from the American Lung Association in California said the bill is “not about protecting us from ourselves.  This bill is about protecting the next generation from tobacco companies.”  She said 18 to 21 is the age when many young adults move from experimental use to regular tobacco use, which is why the tobacco lobby is working hard to kill this bill.  She added that the American Medical Association has recommended raising the smoking age to 21 after studies found t 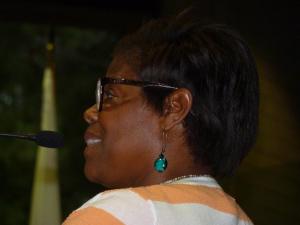 Lorraine Gonzalez with Students Together Against Alcohol and Drugs (STAND) said many high school students here are immigrants from war-torn countries who want to stop their younger brothers and sisters from starting smoking.

Lorenzo Higley, also with CASA, said the U.S. Surgeon General in 2012 issued a challenge in his report: “We know what works. The challenge is do we have the political will to prevent another generation from becoming addicted to nicotine?” Higley told Council, “I urge you to rise to the Surgeon General’s Challenge from 2012.”

Phyllis Webb spoke movingly about losing her husband. “I am a widow of a young man who started smoking when he was 16,” she said, adding that her husband served in the military and died in 1980 of pancreatic cancer linked to smoking. Her son, 30, has now been diagnosed with the same condition. “How many families will have to suffer the same thing?” She asked, then implored, “This is an easy thing to fix.”

Ray Lutz, founder of Citizens Oversight, recalled growing up with cigarette smoke everywhere.  Chiding Anderson, he stated, “I’m really surprised someone in here would make a religious argument that God stands behind the idea that we should allow our children to become addicted to cigarettes. They’re more addictive than heroin.”

Councilman Bob McClellan spoke emotionally about the recent passing of his sister from health complications due to smoking cigarettes. He said his sister started smoking early and became addicted to nicotine for years. He said she had Chronic Obstructive Pulmonary Disease (COPD), emphysema and eventually succumbed to a heart attack. He said that that supports the bill in honor of his sister, mother, and stepfather,  all of whom died due to smoking cigarettes.

“I am in favor of limited government,” said McClellan, a staunch religious conservative. ”But a the same times, we have to stop people from doing things we know can harm them for the rest of their lives. Normally I would vote against regulation, but people don’t have the moral compass they had 200 years ago. Unfortunately, smoking is a moral decision. And the government has to have responsible people to protect people, especially our young people. ”

Taking the opposite stance was Mayor Bill Wells, who spoke out against the measure.  A medical professional, Wells said he sees people die of smoking-related illnesses every day, but also sees people die of diabetes caused by obesity and sees kids with broken bones from skateboarding, yet these activities are not restricted.

“The far left is coming in and taking away our freedoms, one at a time,” the Mayor maintained.  “These are the same arguments the far left is doing about firearms.”

He noted that 18 year-olds are adults.  “My son joined the Marines.  He was fighting for  our freedom in Iraq, and it’s not okay for him to smoke a cigarette?” he asked incredulously.  “Have some courage…This is America. It’s more important to protect freedom than to weigh in on smoking…You say this is immoral, but someone else may say your Bible is immoral tomorrow.”

Wells, who previously ran for the Assembly in 2010, accepted modest donations from owners of tobacco and liquor store outlets that sell cigarettes.

Councilwoman Star Bales offered graciously, “Every speaker was right on some point. But statistics show that if kids start smoking at 18 and later want to quit, it’s harder…I want to give our community, our boys and girls, that chance.” Turning to Mayor Wells, she pointed out that in California, “your son can’t drink until he is 21.”

Raising the smoking age to 21, too, will save lives, she concluded, “and it’s just a few years.”

The Council voted 3 to 1 to support SB 151, with Mayor Wells opposed. Councilman Tony Ambrose was absent.

Eighteen year olds are now legal adults, which is foolish. Ditto with 18 yo's being sent off to fight or die for whatever foolish reason (like profit). Recently it has been shown that brains don't reach full maturity until thirty, which makes sense to me (personal experience). But it's the world we live in, so if 18 yo's (not 30) are legal adults they should not be discriminated against. Let 'em light up. Our lives shouldn't be governed by do-gooders citing statistics (we know about them).
You can die for this country at 18, but government to dictate you can't smoke until you're 21? What we NEED is less government control not more. Government has the I.Q. of CVS. CVS stopped selling cigarettes cause they're bad for you & habit forming. But a big money maker for them is liquor. They must thing that it's not habit forming and no one drives while drunk, get into fights, and causes a myriad of other problems.
I do not smoke and cannot stand the smell of it. Since San Diego is a military town would the law mean that men and women who are being sent off to conflict are too young to smoke here but old enough to maybe die or be injured in conflict?