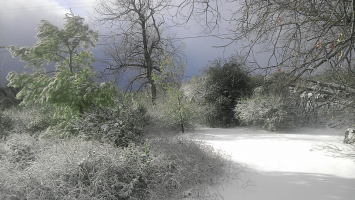 February 9, 2013 (San Diego’s East County) ---Heavy snowfall has transformed our local mountains into winter wonderlands.  Mount Laguna received 10 inches of snowfall in the past 24 hours, followed by Palomar Mountain with 7 to 8 inches.  Cuyamaca also received significant snowfall, as this image sent in by reader Grace Schlesier shows. Frost and freezing temperatures are expected through Monday in inland valleys.

Other areas dusted in white include Julian (3-6 inches), Ranchita (5 inches), Santa  Ysabel (2 inches) and Pine Valley (2 inches) .  Snow even dipped down to Descanso and Campo, which received less than a half inch each.

The sun will shine today for those seeking to frolic in the snow, but carry chains if traveling to higher elevations and watch for icy roadways.