February 27, 2018 (San Diego's East County) -- The National Weather Service forecasts that up to a foot and a half of snow could fall on Mount Laguna by tonight.  As of noon today, over five inches had been recorded at the peak. In Julian, over six inches have fallen.

"This storm is not like anything I’ve seen up here. Sun and snow are going back and forth…and nobody gets anywhere," says Bobbi Zane, who sent us the photos above.  "It’s been snowing all day, then the sun comes out and everything melts, then the snow stars coming down again. I had someone drive on my driveway so I can get my car out. By the time he finished, it had started snowing again. No using the car today!"

Another reader, Donna Yarnell, sent in pictures taken  in Descanso, which is also blanketed in white:

In the Mount Helix and Casa de Oro areas, a hail storm pelted residents, while rain fell across much of the rest of the region bringing much needed precipitation after a dry start to the winter season. (photo, right, hailstones on patio umbrella, by Jason Raftery) 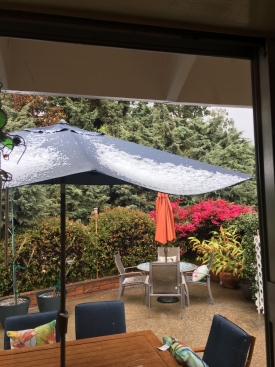