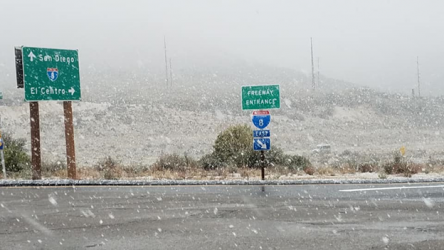 Photo, left by Robert Scheid:  Snow falls along I-8 near the Sunrise Highway exit

A blanket of snow covers the Cuyamaca area, Cal Trans reports on Twitter.  In Warner Springs, chains or snow tires are required, with two inches of snow on Chihuahua Valley Road, NBC 7 reports. Snow is heavy in the Julian area, leaving some residents snowed in, sources told ECM. 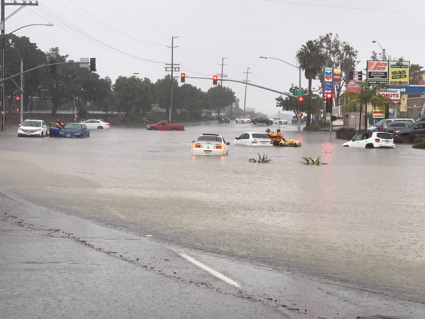 Elsewhere in the County, flooding has occurred. In La Mesa, an RV park flooded with several feet of water, according to 10 News. Along the coast, King tides combined with heavy rains have flooded some seaside communities. (Photo, right, via San Diego Lifeguards)

My son just left home near Alpine to go skiing at Mammoth. His Mom is worried, it's a long drive, highway 395 can be unsafe in good weather.