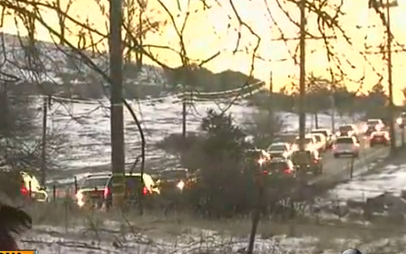 January 2, 2015 (Julian)--This week’s snowstorm transformed much of East County into a winter wonderland.

Nine inches of snow fell in Julian and a full foot blanketed the top of Mount Laguna, with several inches all the way down to Descanso, KNSJ’s home town.

The road to Julian has been ploughed and cleared for travel – but over this holiday weekend, that’s led to traffic jams as snow-loving San Diegans headed to the mountains.

On Thursday afternoon, even Interstate 8 ground to a halt near the Sunrise Highway turnoff and the historic mountain town of Julian became completely gridlocked, 10 News reports. By mid-afternoon, access to some mountain towns was closed off completely with traffic backed up 25 miles or more.

Those fortunate enough to make it into town in Julian scrambled for parking and waiting in lines of up to an hour outside the Julian Pie Company for one of those famous apple pies.

But the tourism is good news for Julian merchants, who have been hard-hit by multiple wildfires, including one that shut down the town’s Fourth of July parade and festivities last summer.

In North County, Palomar Mountain received a full foot of snow—and CHP had to shut down Highway 76 east due to traffic, also shutting down North Grade and East Grade Roads to everyone who wasn’t a resident.

In counties to the north of San Diego, similar issues were encountered.  An ECM reader visiting Lake Arrowhead reported seeing numerous cars that skidded off the road or into snow embankments.

So if you do travel to the mountains, be patient – and carry chains, which may still be required at the higher elevations on Mt. Palomar and Mt. Laguna.