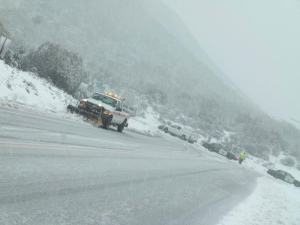 December 28, 2014 (San Diego’s East County) – A cold Alaskan storm is set to strike our region Tuesday night, continuing through New Year’s Eve on Wednesday night, the National Weather Service predicts.  The storm is forecast to bring two to four inches of snow on mountain peaks, with snow also accumulating as low as 2,000 feet –including communities such as Alpine, Descanso, Julian and Jacumba.

Bundle up – since wind chill values will fall below zero in higher mountain areas.  Snow could impact travel on Interstate 8 at Sunrise Pass and on Interstate 15 at Cajon Pass.

In western regions of the county, rain is forecast and thunderstorms are possible.

That’s good news for reducing the risk of wildfires and helping recharge some wells in rural areas, but is not yet enough to end the statewide drought, the worst in recorded state history.