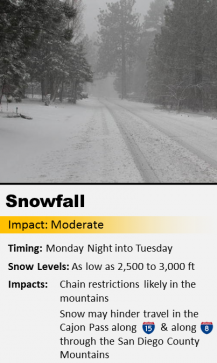 February 25, 2018 (San Diego’s East County) – A cold front is forecast to bring snow down as low as 2,500 feet in East County on Monday and Tuesday, potentially dropping up to six inches on Mount Laguna as well as two to four inches in Julian.

Smaller amounts of snow could fall on Ramona and communities east of Alpine along Interstate 8, such as Pine Valley, Japatul and Descanso, so check weather reports and carry chains if driving in the mountains during these winter weather conditions. Mountain areas along State Route 94 in the Potrero/Tecate divide area could also be impacted.

A light rain is forecast elsewhere in the county, with a possibility of thunderstorms. Rain is expected to be heaviest along the coast, the National Weather Service predicts.

If traveling north out of San Diego County, be aware that Cajon Pass along I-15 could also result in travel delays due to winter conditions.

I have a strong suggestion: Please stay off people's private property, it does not belong to the public. Most owners don't want their land trampled on, fences ruined, etc. It's called RESPECT.

Let's go play. Stop at the Laguna Mountain Lodge to buy a snack or souvenir. There are also two restaurants that may be open.