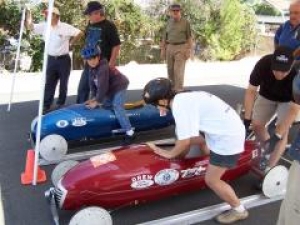 October 27, 2014 (La Mesa) – This weekend’s Soap Box Derby in La Mesa may be the final race for local youngsters.  After 14 years, the event will be terminated unless new sponsors can be found.

The main organizer of the event, La Mesa Kiwanis Club, has voted to end its sponsorship due to other priorities.  In addition, Drew Ford, the other major sponsor, recently sold and the buyer, the Penske auto group, has not confirmed whether it will continue to support the event.

Steven Blake is the only Kiwanis Club board member who voted against dropping the sponsorship.  He told La Mesa Today, "It took a lot out of a few people that did most of the work on these events.I'm still hoping some sponsor will step forward, but if not, these races will be our last.''

Parents and their children build the cars raced in Soap Box Derbies across America.  La Mesa has had kids advance to the national Soap Box Derby championship in Akron, Ohio in the past. La Mesa’s race claims to be the most technologically advanced on the West Coast.

Locally, the race will be held along Junior High Drive between Cinnabar and Parks Drive at La Mesa Middle School on Saturday, November 1st starting around 9 a.m. as boys and girls ages 7 to 17 compete in stock, super stock and master divisions – perhaps for the final time.

If you want more information or are interested in saving  La Mesa’s Soap Box Derby for the future, you can contact Steven Blake at 619-461-1608.