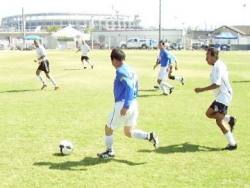 September 10, 2010 (San Diego) - If you think that you are too old to be active, you won't find much sympathy from this crowd. Over 100 players ages 50 and older from throughout the County played a series of soccer matches last weekend (9/4-5) at the Chargers' former practice field in the Qualcomm Stadium parking lot. The featured game was a championship in the age 60+ group between the U.S. and South Korean teams. Teams participated in 8-on-8 as well as fully-configured 11-on-11 matches.

The South Korean team, Royal F.C., traveled to San Diego from Seoul. They are a privately owned team, run by the ownership of the Izumi Japanese restaurant in Seoul. Seven of the team's players played for the national team and in World Cup competition. The team travels extensively to play soccer 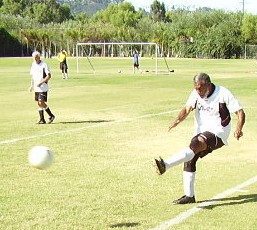 Early in the game, it appeared that the South Korean team would win easily. They had a 2-0 lead in the first half and there was little sign of life from the American team.

In the second half, however, the Americans seemed to wake up and scored two goals. One came on a corner kick where the ball sliced around defenders before going into the net.

The game ended in a 2-2 tie, which posed some difficulties for a championship game. After some debate and discussion over a tiebreaker procedure, the American team requested as a goodwill gesture, that the trophy and first place medals be awarded to the South Korean team, acknowledging the expense of bringing a team from such a great distance.

Floyd North of the San Diego Sports Commission presented the trophy and medals to the South Korean team. Afterwards, the teams decided to play some more. Whether they played for fun or played out of a sense of pride that the previous game should not have ended in a tie, many players from both teams want a rematch, most likely to take place in South Korea. Although there was a language barrier between the teams, the spirit of gentlemen playing a game that they loved was evident to those who watched, and had its own universal language.