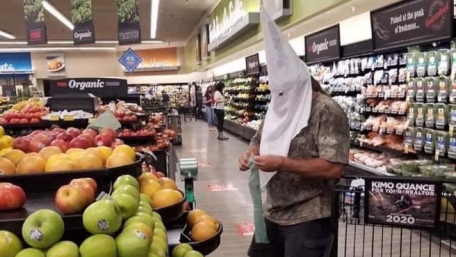 May 3, 2020 (Santee) - Social media users including the leader of the Anti-Defamation League of San Diego expressed outrage this weekend over photos taken Saturday of a male shopper at the Santee Vons wearing a makeshift Ku Klux Klan hood.

On Twitter, San Diego ADL regional director Tammy Gillies posted a photo and said: “Don’t know which angers me more — the person wearing this or the fact that no one in management @Vons Santee did anything about it.” ⁦ 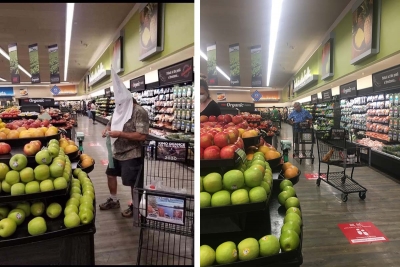 Photos, right:  Photo at left was reportedly taken Saturday at Santee Vons. Photo at right was taken Sunday from same location by Times of San Diego.

Other tweets said Vons security asked the man to shed the hood — ostensibly being used to meet face-mask requirements in San Diego County.

On Saturday, photos taken about 5:40 p.m. began circulating of a middle-age man in shorts and untucked brown shirt wearing a Klan hood in a grocery store’s produce department.

The photographer, who asked to be identified only as Melissa S, confirmed the time and told Times of San Diego what prompted the shots.

“I was in disbelief,” Melissa said. “He was behind me in line. Standing quietly. A man in a wheelchair [went] past and saluted him and he laughed. I took the photo because I couldn’t believe what I was witnessing. I’ve grown up in Santee and have never seen such racism right before my eyes.”

A spokeswoman for Vons — a unit of Albertsons based in Fullerton — said in a statement Sunday:

At Vons, fostering an environment of courtesy, dignity and respect is one of our highest priorities, and we work hard to hold everyone in our stores to these standards, including customers.

Unfortunately, an alarming and isolated incident occurred at our Vons store in Santee, where a customer chose an inflammatory method of wearing a face covering. Needless to say, it was shocking.

Several members of our team asked the customer to remove it, and all requests were ignored until the customer was in the checkout area. This was a disturbing incident for our associates and customers, and we are reviewing with our team how to best handle such inappropriate situations in the future.

Protests at the 9643 Mission Gorge Road store were being organized, Times of San Diego was told. 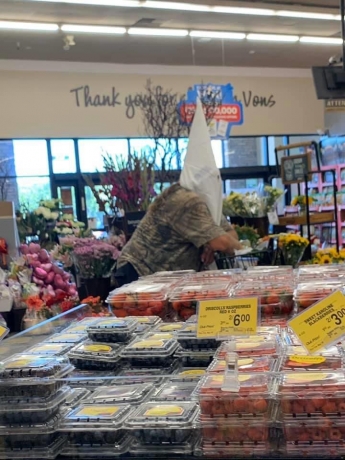 Photo, left:  Photo circulating on social media of man in a Ku Klux Klan hood, apparently in line to check out at the Santee Vons.

Before hearing from Vons officials, Times of San Diego went to the store Sunday and verified that it’s the one in photos being circulated.

The store’s employees are represented by Local 135 of the United Food and Commercial Workers union and its president is Todd Walters.

“The members at Vons #1897 are awesome, [and] work their butts off to keep Santee residents stocked up and I know that this person does not speak for the community,” Walters said via email.

“I am disgusted with this behavior! It’s bad enough that our members must risk their health every day but to deal with this? Management has a responsibility to ensure safety on the work site. We have told members if they do not feel safe, they have the right to remove themselves from that situation.”

One user on Twitter named the hooded gentleman #KlanteeMan, referencing an old reputation of Santee as “Klantee” for its connections to white supremacists.

“I’m a 53-yr-old woman in Vista and if I had seen him I would have ripped it off his head,” said one woman on Twitter.
Another woman said: “I am outraged & angry. Please share the post, and let’s identify the racist POS behind the KKK hood. If you know something, say something.”
“WHY WAS THIS PERSON NOT REMOVED FROM THE STORE IMMEDIATELY??? IS @vons DOWN WITH THE KLAN???” tweeted Touré, the author, journalist and TV host.
One Twitter user thanked Vons management.
“Several employees came over together and told the man to either remove the hood or he would have to leave, so he removed the hood,” said a tweet later deleted. “So troublesome in so many ways this is still happening in Santee at Vons. Disgusting!” 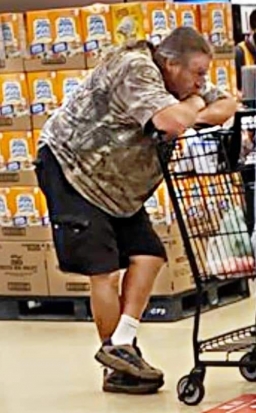 Dave Myers, a former candidate for San Diego County sheriff, asked in a tweet: “Did anyone report to the Sheriff?”

When asked why one should, Myers replied: “KKK is a national recognized HATE group prone to violence. If sheriff was serious about stopping hate groups, he’d want to know (he should know) who that racist is and his associates.”

Melissa S., who took the shots in the produce department, said she wasn’t the one who took pictures of the man with the hood off.

“I didn’t turn around to take more photos without [the hood] because he made me feel uncomfortable,” she said.

She didn’t want him shamed, however.

“Shamed, no,” she said. “I’m sure his face all over is shaming him. But a man his age should know better.”

There was an incident in Santee on Saturday where citizens photographed a male wearing attire that depicted a symbol of hatred. The citizens and Vons employees took steps to address the situation. Many thanks to all who stepped forward to curtail this sad reminder of intolerance. Santee, its leaders, and I will not tolerate such behavior. Santee and its citizens are great, and this particular individual's actions are not representative of us as a people and a wonderful city.

The San Diego Sheriff has also issued a statement:

The San Diego County Sheriff's Department has been made aware of an incident involving a man wearing a white Ku Klux Klan hood at a grocery store in Santee on Saturday, May 2nd.

Deputies were not called to the scene at the time the incident took place. Detectives from the Sheriff's Department are looking into the matter and will pursue any appropriate criminal charges.

The Sheriff's Department does not condone hate or any acts of intolerance in our communities. We are a county that is welcoming of people from all backgrounds.

Anyone with information on this incident can contact Sergeant Claudia Delgado at (619) 956-4050.

Why wasnt he removed when he first refused to take it off? What is his name and address?He should be outed publically, and whatever happens to him and his family and home and car, well, it happens. Violent acts included.

With more than 68 million deaths in the country, it is truly sad to see a man in the Santee, California area wearing a KKK hood in a store. This should not be seen as a testament to the citizens of this city. The attached video says a lot about the seriousness of this Coronavirus Pandemic, and I pray that we all stay safe and get beyond this. See video here.

What is this racists name????