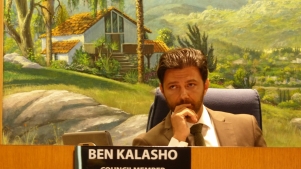 Photo: Councilman Ben Kalasho during testimony by Paul Kruze regarding Kalasho’s alleged threat to maul the reporter with a trained attack dog

July 13, 2018 (El Cajon) – After our reporter Paul Kruze filed a police report alleging that El Cajon City Councilman Ben Kalasho threatened him with an attack dog, the San Diego chapter of the Society of Professional Journalists issued the following statement:

“The San Diego chapter of the Society of Professional Journalists is greatly concerned by the behavior of El Cajon City Councilman Ben Kalasho toward East County Magazine reporter Paul Kruze, as alleged in Kruze’s statements to the police. Threatening or intimidating journalists is unacceptable behavior from any member of the public — but especially from elected officials."

The statement continues, “Journalists have a right to do their jobs without fear of violence. We urge the El Cajon Police Department to fully investigate the incident that took place on June 23 between Councilman Kalasho and Mr. Kruze. Our institutions and elected officials must do everything they can to ensure the safety of journalists in the exercise of our collective First Amendment right to a free press.”

Kruze was photographing Kalasho’s campaign vehicle, a motorized golf-type cart, in the public parking lot at Parkway Plaza when Kalasho and his wife saw him and the confrontation occurred.  Kruze has said he was taking photos because the cart had a sign encouraging the public to take photos of Zoltan, a German Shepherd that Kalasho has trained as an “attack dog” according to videos Kalasho posted online.

Kruze contends that Kalasho allowed the dog to lunge and growl at him, laughing and making a verbal threat. Kalasho has claimed he feared for his wife’s safety despite knowing Kruze is a journalist who regularly covers City Council meetings.

Kalasho has engaged in a pattern of defamation and retaliation targeting journalists who have reported on his recent ethical and legal controversies, including alleged sexual harassment of women and cyber-harassment and defamation of several people that San Diego Superior Court Judge Timothy Taylor has now deemed admissible in court as “true.”

Facebook took down a post by Kalasho that published a photo of Kruze’s license plate and other personally identifying information in violation of site rules. Kalasho’s post also contained inflammatory language that incited others to post death threats against Kruze, including posting photos of guns and tips on what caliber to use to commit murder.

Kruze, speaking during public comments at Tuesday’s City Council meeting, called Kalasho a “coward” for dodging interviews and instead threatening Kruze, an award-winning journalist, with violence. He called for Kalasho to resign, one of 11 people at the Council meeting to do the same.

David Snyder, executive director of the First Amendment Coalition, said of Kalasho in September 2017, “His behavior is extraordinarily irresponsible. A public official should not be in the business of threatening groundless litigation over acts that are things that reporters do every day.”

Someone setup an “unofficial fan page” on Facebook for Ben. Pretty funny stuff. Ben got busted using a fake profile to comment.

Mentally unbalanced people believe what they are doing (such as what normal people find aberrant) isn't wrong. And he's much too busy trying to baffle people with BS, because dazzling us with brilliance isn't working. When people believe their own rhetoric, I get nervous, because one cannot predict their following actions.
I am taking up a donation drive to purchase Mr. Kalasho a fiddle. So as his "House of Cards" burns he has something to play. What a pathetic excuse for a City "Official". Why can he not see the contempt the people of El Cajon have for him.
Feeling the Burn yet Mr. Kalsho? Leave now, while you still have a thread of dignity left - at least in your own jaded mind.