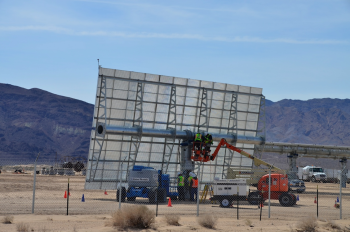 Greentech’s article indicates that the language may be vague, but the publication predicts, “…the message is clear: Soitec is exiting this business as quickly as possible.”

The news comes as San Diego Supervisors are poised to vote Feb. 7 on whether to approve massive  industrial solar projects proposed by Soitec in Boulevard.

But Soitec’s financial situation is precarious; the company’s stock recently plummeted to a quarter of its prior value and this week Soitec announced layoff of 100 employees at its Rancho Bernardo solar photovoltaic factory.

Donna Tisdale, Chair of the Boulevard Planning Group, says she believes “Soitec Solar is just one more example of government `selected winners’ that turn out to be big losers—all at the expense of taxpayers, ratepayers, and impacted communities.  And yet the County Planners and Planning Commissioners have recommended approval to convert 1,185 acres of Bouelvard neighborhoods into Soitec CPV projects with 160 cargo containers of highly flammable batteries and about 10 mlies of new overhead high voltage lines using millions of gallons of drought-stressed groundwater.”

She believes Supervisors may be poised to approve the project despite its devastating impacts on her community, wildlife and the ecosystem of the region.

Tisdale asks that people throughout San Diego County call or e-mail their Supervisors to voice opposition to the Soitec projects, called Rugged Solar and Tierra Del Sol before February 4th.

Backers of the projects contend they wil help reduce greenhouse gas emissions and meet state renewable energy goals. But opponents contend that those goals could be met through incentivizing rooftop solar instead of negatively impacting residents in a rural community and views along a designated scenic highway.