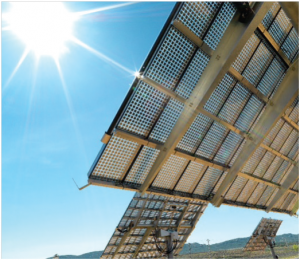 March 3, 2015 (Boulevard) – After winning approval of Supervisors for two controversial industrial-scale projects in Boulevard, Soitec Solar in a surprise announcement has withdrawn one of them.

Soitec Project Manager Patrick Brown has advised the County that Soitec is exiting the solar business and has been unable to find a buyer for its Tierra del Sol Project, though the company is still continuing its efforts to complete the Rugged Solar project.

I regretfully request a denial of the Tierra del Sol Solar Project Franchise Ordinance that is before you this Wednesday as item number two. As you may know, Soitec Solar Inc. has decided to exit the solar market and focus on its primary core microelectronics business. Soitec is in the process of selling the solar assets as well as its manufacturing business. As a part of this, I have been tasked with selling the solar land assets in San Diego County. It is unfortunate that we could not find a willing buyer of the Tierra del Sol project that was approved by your Board last month. Because of the lack of interests and expensive carrying costs, we have since canceled the land options and the CAISO interconnection positions Q-794 and Q-895. The result is that the project has been officially terminated. Therefore, I request that you deny the Franchise Ordinance that is before your Board Wednesday because there is no project that would benefit from this ordinance. Once again, I appreciate your support and the Board's support of the project approvals. It should be noted that we are continuing the effort to complete the Rugged Solar project out of the portfolio.

Donna Tisdale, chair of the Boulevard Planning Group and founder of Backcountry Against Dumps, a citizens group suing to halt the projects, called the withdrawal of the Tierra del Sol project “good news” and adds that she remains hopeful that the Rugged Solar project may ultimately also be cancelled.

The projects drew community opposition over concerns about destroying views and wildlife habitat on over 1,100 acres, as well as over fire dangers posed by electrical equipment and the  massive amounts of groundwater slated to be used for construction.

Send Donna some money to assist her efforts.
See what happens when you let the free market determine need. No government money no project. Take a note of this my Socialist Congress.
I hope all of the rest of the destructive "green energy" projects will also NEVER be built, including in McCain Valley. It's a GIGANTIC waste of our taxpayer money that could have been used towards rooftop solar.
Great news. Let's hope there's more to come!