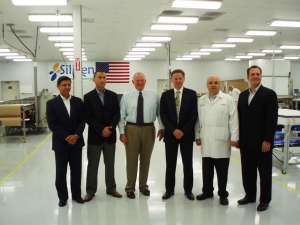 Annually, the plant’s output capacity was 27 megawatts; a productivity of 100 megawatts is now projected for 2010. In addition to large-scale solar systems, Siliken also produces photovoltaic modules. 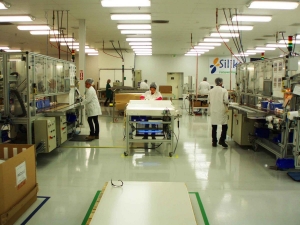 Spain-based Siliken has become a worldwide leader in solar power. It established its North American headquarters in San Diego in 2008, as California began to embrace a larger share of the sustainable-energy market. The green-tech company cites recent environmental legislation—Assembly Bill 32 and Assembly Bill 811—as pivotal incentives to plant roots in Southern California.

“We’re in a position right now where the world is beginning to recognize that going green, going solar…is a reality,” says Jorge Molina, the Otay Mesa plant manager. “We’re determined to make it work here in San Diego.”

Molina says that his plant’s workforce stands to directly benefit from this upswing. “In the short-term, it’s bound to generate in excess of 100 jobs. Right now we have approximately 60 [employees], and most of those were brought on within the last 12 months.” Moreover, he asserts that this expansion will not only create an influx of manufacturing jobs, but more specialized fields will also be tapped as new engineers and project managers are brought onboard.

As an ancillary benefit, Davies concludes that his company’s presence in the San Diego marketplace is also attracting other green companies here.

Mark Janis, Siliken’s director of finance, observes that internal job growth will have a ripple effect in many business sectors throughout the local economy. “The fact that we’re a globally recognized brand, we’re also providing jobs to a lot of the electrical installers that are putting solar panels on residences.” He also states that as the construction industry starts to rely more heavily on clean technologies, Siliken has greater leverage to supply big contractors with what they need to help rebound in economically depressed times.

Molina adds that a commitment to leaving a smaller carbon footprint is also a companywide passion. "We’re really here to change the world.”

Siliken is targeting three core areas: agriculture, cold-storage and governmental projects, Janis observes. He reveals that Siliken is poised to capitalize on local, state and federal opportunities in particular because its solar panels have made-in-the-U.S. labels. “Since we’re headquartered here, we qualify for that designation. And that precludes a lot of Chinese manufacturers from getting those jobs.”

Mayor Sanders recognizes green energy as a key local growth market. “California is obviously the best solar market in the U.S., and San Diego is the best market in California,” Sanders remarks. He envisions the region at the economic forefront of a national trend—a breeding ground for other green innovations.

“A lot of different industries in San Diego have undergone job losses…Clean tech has actually added about 1,800 jobs over the past year and a half,” the mayor counters. “This is an industry, specifically Siliken, that’s growing and thriving. As the market picks up, they’re adding employees—as are a lot of clean-tech industries.”