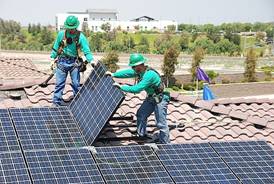 March 30, 2015 - (San Diego) - Dan Jacobson, Program Director for Environment California states,“San Diego is one of the country’s brightest stars when it comes to solar power.”

The results of a study done by the Environment California Research & Policy Center found San Diego ranks second in the nation overall in solar photovoltaic installations and fourth in the amount of megawatts of solar power generated per capita.

Los Angeles lead the nation with 170 Megawatts of installed PV power but San Diego is installing more solar at a faster rate.  San Diegans installed 42 megawatts of solar power during 2014 compared with the 38 megawatts installed in Los Angeles over the same time period.

Jacobson continued, “San Diego is turning its commitment to solar power into a clean energy future."

Why is this happenning?  What are we doing right?

“We need California leaders to continue the policies that allow solar to shine” said Jacobson.  “While solar power is growing in California and throughout the nation, utility companies are campaigning intensely to increase fees for rooftop solar, which they see as a direct threat to their business model.”

"This is even more proof that San Diego is an innovation hub and a strong leader in renewable energy sources.  Continued federal support for solar energy and other renewable sources must be a priority.  San Diego should be proud of this ranking.  Now let's go for that top spot!"

Mayor Kevin Faulconer, Councilman Todd Gloria and representatives from the nonprofit Environment California Research & Policy Center, which conducted the study, met at an affordable housing complex powered by solar energy. The Bridgeport complex's solar system contributed to the 149 megawatts of solar capacity in operation in San Diego at the end of last year -- enough to power around 32,000 homes.

"San Diego is leading the way in solar energy, and that's going to help us meet many of our city's environmental goals and put San Diegans back to work," Faulconer said. "Solar energy is a key element to the city's proposed Climate Action Plan, which calls for 100 percent renewable energy use in the city by 2035."