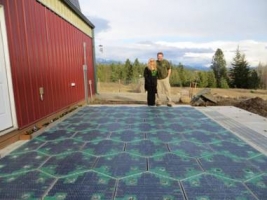 April 15, 2014 (San Diego’s East County) – In 2012, we reported on a potentially promising new technology to build roadways out of glass capable of producing solar power.

Now Scott Brusaw at Solar Roadways Newsletter has provided an update on a prototype parking lot that has now been installed. View photos:  http://solarroadways.com/prototypeII.shtml

He writes, “Naturally, our biggest challenge was the glass surface. Our design was tested (in various university civil engineering labs) for traction (British Pendulum Test), strength (load testing) and toughness (Impact resistance testing) and the results were far beyond our wildest hopes.It was rough installing through a cold Idaho winter, but it gave us a chance to see how the heaters performed. They prevented snow and ice from accumulating just as planned. The panels were even warm and dry to the touch. We're collecting solar energy from the parking lot and it's exciting to see the amount climb every day as the sun rises higher on the horizon with each day of spring.”

The parking lot is located right outside of the company’s electronics lab for monitoring day and night. It's 12-feet wide by 36-feet long and is “our first fully functional prototype with solar cells, heating elements, and LEDs to paint road lines and verbiage,” he adds. “As you can see in the pictures, the solar cells (the dark rectangles) only cover 69-percent of the panels. This is because we used "off-the-shelf" solar cells, which wouldn't fit our hexagons' angles. We're currently looking for a solar cell company to make custom sized solar cells so that we'll have 100-percent coverage of the surface area.”

Quarter-inch gaps between panels allow for expansion and contraction and can eventually be filled with liquid mastic. Mounting hole covers will also be installed, he added.  Next up will be writing software and firmware for LED functions.

“We are blessed to have the interesting problem of having a huge list of interested customers from all 50 states and numerous countries before we are product ready. We are pleased that our own hometown of Sandpoint, Idaho is applying for a grant to use our panels for roads and sidewalks,” Brusaw adds. Read the story here: http://www.bonnercountydailybee.com/news/local/article_604a09ac-baf0-11e3-94d2-0019bb2963f4.html

"While all of the functionality of the parking lot works, we still have some features we'd like to add: we want to add load cells and piezoelectric elements to improve functionality and energy harvesting. We also want to continue working on charging EVs statically and dynamically (while they're driving down the Solar Roadway). It's now time to gear up for manufacturing and we need to hire a team of engineers to help us streamline the process," he said.

The company also aims to avoid an issue that has plagued industrial-scale desert solar facilities, where a "lake effect" has been blamed for attracting waterfowl and migratory birds that were killed on impact.

"Our textured surface is pretty obvious, but even if they miss that, the illuminated LEDs should give them a head's up," Brusaw told ECM when asked asked about the issue.  "Unlike other forms of renewable energy, we haven't killed a single bird!"

The company is launching a crowdsource funding drive through an Indiegogo campaign on Earth Day, April 22nd. “We will be offering many unique perks, some of which will be one of a kind limited editions,” Brusaw stated.

The best way to keep informed of the company’s progress is on its social media sites: