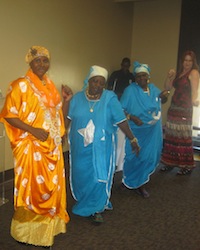 October 3, 2013 (San Diego) - The Somali Bantu Association of America held a fundraiser for their youth group to receive new supplies and computer activities. Throughout the event in September, there was also a silent auction on African beads.

Isha Aweyso, a volunteer of the association, welcomed everyone. “We have things you can buy to help our community,” he said, noting that the event benefits students. “I’m really thankful to have this association community.”

Dances were performed to traditional music by women, youth, and children. Said Osman Abiyow, President and CEO of the association, stated that on “September 21 each year, we are honoring our national hero.” He then thanked their special guests, Michael Cheramie from SpecPro Technical Services and his wife Deborah, and the association’s grant writer Frank Wagner. “I appreciate their work in coming down here.”

Deborah Cheramie commented, “I love seeing what you guys do for the community.”

Michael Cheramie said, “The Somalis, all Africans, are the hardest working people I work with…Everybody cares about each other.”

Wagner said, “It’s an honor to be here today.”

Then, Ali Sabtow and Osman Muganga, with Osman Mohamed translating, each made a speech. All three are with Somali Bantu Association of America.

The hero, Nasib Bundo, a forgotten Somali, who lived in the 18th/19th centuries, sought to protect his people from slavery and injustices committed by the majority Somali population. He sought freedom and liberation for them.

Muganga began, “Today, we have the 10 year celebration of Nasib Bunde...we are really happy today.”

Sabtow continued, “There were two groups--Somali Somali and Somali Bantu. When they were fighting, they were using only an arrow…We’re never going back to Somalia again…We have never seen Somali Bantu go on an airplane…It was our first time in the United States to see an airplane…I’m the father of Said…Said learned English in Kenya,” Sabtow noted. “We thank very much the local government to give us this chance for gathering to celebrate our hero.”

Abiyow concluded, “Somali Bantu is improving the quality of life for everyone…Know that today our economy and our needy is very down…Things we overcome about our children’s safety are our first priority…A lot of the kids are graduating and I’m very happy. Our association is open to everyone. We have a lot of volunteers and we need a lot.”

Michael Cheramie told ECM how he got involved with this event. “I was invited here.” Then he explained what his business does with the Somali Bantu. “We set up African villages in our town [in Oceanside]…set up role-players…getting ready to expose the military to Africa.” 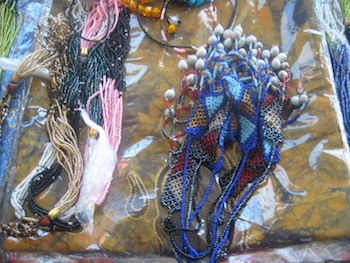 Since the military has only been to Iraq or Afghanistan, they don’t know what it’s like in Africa. So, SpecPro puts on a play of sorts to showcase Africa to those in the military. Visit: http://www.specpro-tech.com/training.html to learn more.

ECM also interviewed Abiyow. We asked about the mission of Somali Bantu.

“Our mission is to help immigrant people in healthcare and education etc. to assimilate into America and help our youth in tutoring etc.,” Abiyow said.

The organization has a November 9 fundraiser to help implement programs for kids. “That way, they’ll obtain the necessary skills they need,” noted Abiyow, citing cooking as an example.

Asked for details about Somalians and what’s brought them to San Diego, Abiyow replied, “We are a minority people. We came to America for freedom.” 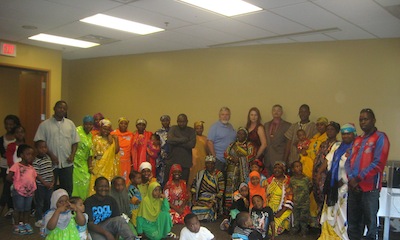 On their website, you can learn more about their history. The Somali Bantu are descendants of the slaves by the Sultan of Zanzibar in the 18th and 19th centuries. From 1991 to the present, Somalia has been in a state of anarchy where many have been displaced or have fled to neighboring countries to avoid violence. The United Nations and other parties have placed the Somali Bantu in refugee camps in Kenya. Then, they are brought to the U.S.

To learn more, visit: http://sbaoa.org, where you can also make a donation.