By Donald H. Harrison, Editor, San Diego Jewish World
Reprinted with permission from San Diego Jewish World, a member of the San Diego Online News Association
May 11, 2020 (Santee) — So, imagine you are shopping and into the store comes someone who is wearing a Ku Klux Klan hood, or a face mask with a swastika on it, as happened respectively at a Vons and a Food4Less outlet in Santee recently.  What should you do? 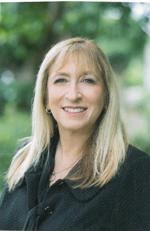 I asked Tammy Gillies (right), regional director of the Anti-Defamation League, what she would suggest.  Her answers divided the suggested responses by categories.
Gillies said that whereas Hart’s social media presence indicates that he espouses hard-core white supremacist beliefs, other demonstrations using Nazi symbols to protest California’s “stay-at-home” restrictions are different in intent, but are nevertheless dangerous.
At various protests around the state, California Gov. Gavin Newsom has been depicted with a Hitler-style mustache in an effort to equate the restrictions he placed on public gatherings during the coronavirus pandemic with Nazi-style abrogation of the public’s right to assemble peacefully.
The problem with that, according to Gillies, is that by comparing Newsom to Hitler, and public health regulations to the oppressive laws of the Nazi era, it has the effect of minimizing the Holocaust in which six million Jews among other people were ruthlessly murdered because Hitler and his followers considered them to be inferior to “Aryans.”
“Nothing compares with the Holocaust,” Gillies said flatly.
Meanwhile, after questioning the man who wore the Ku Klux Klan hood, the Sheriff’s Department announced that he would not be cited, as his act — however hateful it might be — was protected free speech.  The sheriff’s office said the man told them he had worn it to protest being told what he could and could not do and did not mean it as a racial attack.

Violence is not going to work out well for anyone, but antifa and the new black panthers are much more figments of the paranoid right wing (and Fox News) imagination than anything else. Neither is very influential on the left, I can tell you that. If they did not exist someone on the right would have dreamed them up just so they could carry out their whataboutism. I'm going to disagree with the Anti-defamation league on one thing: no, everyone has a responsibility to publicly shame anyone who would wear a KKK mask or a Nazi symbols. That can not be allowed, and each of these people should be confronted immediately. I was happy to see so many people in Santee standing up.
The same advice applies to the left wing extremists Antifa who wear all black bloc uniforms with black masks and are inherently hostile to Israel and traditional Judaism as they spout BDS anti-Zionist/anti-Semetic rhetoric
Oh right. We're all familiar with the left wing "terrorists", Anitfa. They are all over the news, threatening people with military assault weapons; threatening to harm officials who don't conform to their thinking; and spitting in police's faces. Oh wait, that's the far right wing KKK/Nazi extremists that make up a hefty percentage of Trump's base. They were flown in to Charlottesville and flown in to cities that are protesting COVID19 lock downs to show how violent these people can be. Then there's Boogaloo, the right wing plot to create civil war. And Anifa being anti-Semite? Your Nazi buddies killed 6 million Jews, they're a tad more anti-Semitic.

Really? Guess that's me. And here I thought I was just an old Goldwater supporter.