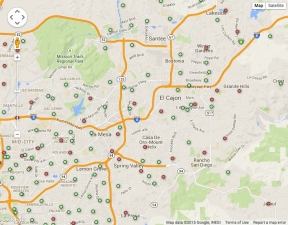 By Miriam Raftery; Kristin Kjaero contributed to this report

February 6, 2015 (San Diego’s East County) – The current measles epidemic  has focused attention on concerns over parents who decline to vaccinate their children.  In East County and San Diego’s inland region (East of I-15) the rate of unvaccinated children in local kindergartens is as high as 90% (at Holy Trinity, a private school in El Cajon)  down to just 1% unvaccinated at Mt. Vernon Elementary in Lemon Grove.

Countywide, the rate of kindergartners who are unvaccinated or not current on vaccine boosters  is 7.6%.

Voice of San Diego recently published an interactive map showing  the number of unvaccinated children at each school in San Diego County, which ranged from zero to 100%.

East County Magazine used that data to create a  map and a database chart showing schools with vaccination rates worse than then county average in East County and inland San Diego. We also created a database chart that includes the total of unvaccinated kindergarten children (exemption number) and the percentage of kindergarten children who are unvaccinated claiming exemptions at schools in East County and San Diego’s inland region. View the Voice of San Diego interactive map of all kindergartens countywide here.

California currently allows parents to claim exemptions from vaccination requirements for “personal beliefs” unlike most other states where  only religious or medical need exemptions are allowed.

The rate of unvaccinated children is important, since they can contract diseases such as measles and endanger other children or adults who rely on the “herd” immunity of numerous people who have been vaccinated.  Unvaccinated people can spread these potentially dangerous illnesses to those who cannot get a vaccine for medical reasons, such as people with immune diseases or illnesses such as lymphoma cancer, as well as infants under one year of age.

Complications from measles can include high fever, brain damage, hearing damage/deafness, pneumonia and death.  Before the measles vaccine, hundreds of people died of measles in the U.S.

Children who don’t have vaccinations can also  face interruptions in their education, since some schools including schools in Los Angeles and Chicago are now sending all unvaccinated children home for three weeks following an exposure to measles at their schools, to prevent the spread of the disease.

Today, State Superintendent of Public Instruction Tom Torlakson urged all parents to get all recommended vaccinations for their children, adding, “ Vaccines help students avoid crippling, debilitating, and costly diseases such as measles, mumps, rubella, and chicken pox. They keep students healthy so they can attend school, learn, and succeed, and they eliminate school disruptions such as those caused by the recent outbreak of measles. As a science teacher, I have reviewed the science and can tell you the vaccines have been proven safe and effective for those students who are healthy enough to get the immunizations. They keep your child and your community protected.”

as we noted, but we created the chart to show the East County schools rates of vaccinations.  This is publicly available data.

Vaccines are not foolproof but outbreaks of these terrible diseases harm more in areas of the world where vaccinations are not present.

My daughter caught chicken pox as a baby (too young for the vaccine) from an idiot who brought a child obviously contagious with the disease into our pediatrician's waiting room.  A kid who was old enough to be vaccinated but was not.  My daughter then got shingles at age 13.

The law does allow anyone with a valid medical reason, such as allergies to an ingredient in the shot, or a bad reaction to the first shot in a series, not to get vaccinated.  Parents should read up on every vaccine carefully.  There are some that should not be given to kids who are immune compromised or those with certain medical conditions.  Some are not suited for people allergic to latex, eggs, etc.  I suspect some reactions are in people who shouldn't have had the shot to start with. You can check the CDC website for very detailed information on this.

If a parent wants the "right" not to vaccinate their child then in my opinion, the rights of the many other parents who want to protect their kids from awful diseases should take precendent, and those who don't vaccinate should not be allowed in public schools or crowded public places like Disneyland.  If a private school wants to admit non-vaccinated kids, fine as long as all parents are notified of the risk.  The exception would be a child with a valid medical reason for not having the vaccine; there should be very few of those and those children should not be discriminated against due to a medical condition and should be allowed in school unless there is an outbreak.

I am old enough to remember the horrors of diseases now wiped out in the country thanks to vaccines -- a cousin whose husband was in an iron lung for life due to polio, for instance.

There is by the way a major new study out debunking the myth that vaccines cause autism, for those concerned about that.

Could a child be injured by a vaccine despite all precautions?  It's always possible, but so is keeling over running in PE class.  But not exercising and getting obese is more risky in most cases.  Public schools need to look out for the greater good of the vast majority of the children. That's why PE is required, unless a child has a valid medical reason not to participate.  It's why we ban smoking in many public spaces, to protect others from those who proclaim their "right" to enjoy smoking and endanger other people's health.

Now of course if someday there is a credible study that changes the scientific data on this, we would publish that.  But there have been many studies done, enough for legislators to make rational decisions to protect the vast majority of children and their families from the few who want to put their own "rights" above the health of other children.

Also worth remembering, kids who have medical reasons not to get certain vaccines, including many with cancer, AIDS, or other conditions that weaken their immune systems, are the ones most apt to have serious effects if they contract these diseases. They have NO protection other than the "herd immunity" effect of many children having the vaccines.  To me it seems wrong to put these ill children at serious risk by refusing to vaccinate healthy children, not to mention risking the health of one's own children.

Dear Miriam Raftery; Kristin Kjaero, I respectfully write hoping that you have only used statistics provided to you (wondering who provided them?) and have not actually intentionally used slighted statistics to promote the vaccine fear agenda. The chart is very misleading. some of the percentages appear high but if you look closely, some of the enrollment totals are low. A Waldrof school in San Diego shows 56% PBEs but it only has a total of 32 enrolled. That's only 18 kids that might be missing one vaccine or be on delayed schedule. Not necessarily 100% unvaccinated. There's another school with 90% PBEs. That makes it sound high but kinder total enrollment is only 20. Would you be willing to really look at information about vaccines, their effectiveness, their risks, the actual costs and who is really making billions of dollars in this industry? Measles, Mumps, Ruebella, and chicken pox are costly to the families who children have been vaccine injured. There costs go over $70,000 per year in different services rendered. Most of these families are denied compensation from the Pharmaceuticals companies which can no longer be sued.. There is a no fault compensation program but more than half that apply are denied. Please find out about this information and at least publish both sides. We are however, responsible, concerned and active parents in our children's healthcare decisions. We are their advocates, along with our doctors, As it seems E. County parents are well educated on the subject. By the way Disneyland, measles cases 136 reported, no deaths. Most likely now have lifetime immunity. 57 of those were unvaccinated. 25 had 1 or more doses of vaccine. 54 unknown if they were vaccinated? Maybe from other countries? 5 of the cases were not the same strain as the as the outbreak strain. This happened in Dec. 2014 and by March 2015 SAID “outbreak” over. Please be willing to really investigate information on vaccines, Parent's rights to choose for their children are at stake here. Thank you!