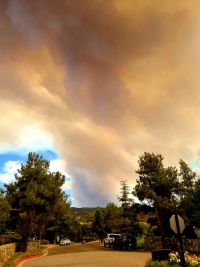 However, as damage assessors were able to access more areas, additional homes burned prior to last night were found. A total of 26 homes have been destroyed, primarily in the Carveacre and Lawson Valley areas.

Two firefighters suffered minor injuries, a leg burn and a bee sting to the face.

The County of San Diego added information at its SDCountyRecovery.com site and has established a Recovery Hotline at (859) 715-2200 and an email to help those affected by the Valley Fire. The hotline and emails will be answered from 8 a.m. to 5 p.m. weekdays and through the upcoming weekend.

Power has been restored to more than half of the  nearly 4,000 customers impacted by the #ValleyFire.  "Our crews have nearly finished fire damage assessments & 80-90 power poles need to be replaced. Thank you for your continued patience," SDG&E tweeted this evening. Visit http://ow.ly/ft2k50BmEGN for additional updates.

Residents in areas impacted by the Valley Fire can call 211 for non-emergency fire information such as evacuation orders, shelters and road closures.

For more info on returning home after a wildfire visit http://bit.ly/ReturnAfterWildfire.

For the latest emergency updates visit www.SDCountyEmergency.com and download the SD Emergency app on your cell phone.