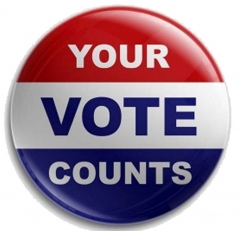 Hunter lead slips to 4.6% or 11,141 votes; Anderson now trails in Board of Equalization

November 14, 2018 (San Diego) – Voter turnout was heavy for a mid-term election -at 51%, according to San Diego’s Registrar of Voters. Since election night, late mail-in ballots and provisional ballots have been trending heavily Democratic nationwide and locally. The lead has flipped in some key races here ranging from a mayoral contest to the board of equalization, and other candidates including Rep. Duncan Hunter have seen their leads shrinking.

Countywide, 254,000 ballots remain to be counted, but there is no breakdown available on how many ballots are in any specific district. Here are updates on some key races to watch:

Duncan Hunter was up by around 8% on election night, but his lead has diminished to only about 4.6% over challenger Ammar Campa-Najjar tonight among all ballots counted so far in both San Diego and Riverside counties. Hunter, a Republican under indictment for felony campaign finance violations, is now ahead by only 11,141 votes:  106,823 to 95,682.  Campa-Najjar, a Democrat, has not yet conceded.

Democratic attorney Mike Schaeffer has pulled ahead of State Senator Joel Anderson in the Board of Equalization seat 4 race. Statewide, Schaeffer now leads 50.6% to 49.4%, a difference of 26,059 votes, in the race spanning 5 counties.  Anderson, who was ahead on election night, is now losing by an even wider margin in San Diego County, his home turf, where he trails by about 6.5%.

Escondido’s Mayor Sam Abed was ahead on election night and predicting victory. But as of tonight, his lead has shriveled to just 236 votes over Paul “Mac” MacNamara. Abed has drawn criticism for policies viewed as racist, resulting in a lawsuit against the city filed by the American Civil Liberties Union after Abed ordered busses with immigrant children blocked from reaching a shelter. The settlement cost the city a large sum.  MacNamara, a retired Marine Corps colonel, has criticized Abed’s racially divisive tone.

In the statewide Superintendent race, Tony Thurmond has pulled in front of Marshall Tuck by 50.5 to 49.5%, a difference of 76,985 votes. Both are Democrats, but Thurmond is endorsed by the California Democratic Party and the California Teachers Association.