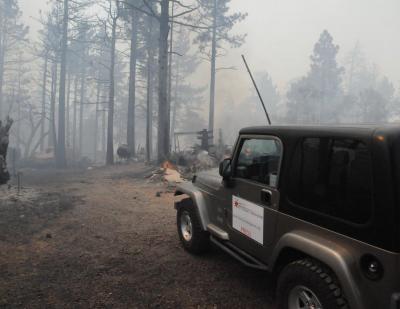 July 27, 2013 (San Diego) This has been a busy few weeks of news gathering for East County Magazine. We were at the scene shortly after the Chariot Fire started. We made multiple trips to Mount Laguna reporting on the fire’s path and damage behind fire lines, also visiting the evacuation center. We remained long after other news media left, if they came at all.  We were at the fire scenes in Ranchita, the Old Fire, the Shockey Fire and more – sometimes in the middle of the night.

We regularly cover local boards and commissions that the San Diego media ignores.  We drove to Julian to cover fire board meetings and report on citizens’ concerns when the fire department was at risk of dissolving and being taken over by the county.  We went downtown to cover hearings on the controversial County wind ordinance, the Quail Brush power plant, and other hot land-use issues impacting East County.

In the past month alone, we've told you about Santee declaring emiment domain on homes, El Cajon voting to reopen the East County Performing Arts Center, SDG&E rate hikes, Helix Water's proposed rate increase, actions by Congress and the Supreme Court on issues ranging from civil liberties to voting rights. On the new radio show, ECM's editor and our other show hosts have interviewed newsmakers ranging from Congress to City Council, the new East County Chamber of Commerce general manager, enviornmental leaders, an advocate for homeless women veterans, local college valedictorians, Native American musicians, a healthcare expert, local authors and historianis, citizens concerned about issues in their communities, and many others.

At Comic-Con,  we interviewed Congressman John Lewis, an icon of the Civil Rights movement, while many national media organizations were not even aware he was coming.  We scooped such huge media outlets as the AP and Reuters. Our commitment to cover voices often not heard in the media has included our coverage of Native American issues, local refugees who fled war-torn Iraq and Africa, and more.

Recently we’ve been on the spot to cover the San Diego Mayoral scandal, covering press conferences downtown and interviewing participants in what is now a national, indeed international story.  This last scandal has been moving so fast that yesterday I was among the last, if not last reporter allowed into the conference room in San Diego City Hall.  San Diego politics impacts our entire region, plus the latest alleged victim is a San Diego State University dean of fine arts.

We’ve also traveled to the far corners of East County for human interest stories,  such as the dramatic rescue of a Potrero man who fell down the well, or a fundraising event  in Jacumba to help victims of the Shockey Fire.

We stay up at all hours to send you alerts via email, Twitter and Facebook as well as on our website about emergencies such as wildfires, road closures, flash flooding and much more.

Why am I writing these details? That Jeep you saw at the Chariot fire during our coverage does not run on air. All this intense news coverage, whether it's a fire, a local hearing or a national news story here in our own backyard, requires money.

High quality journalism is not free.  Your donations are needed to fund ECM’s intense news-gathering and expenses for our hard-working reporters and photographers. Whether it is a local Fire Board, an East County story nobody else covers, or a national story here at home, this is what your contributions cover.  ECM has won 45 journalism awards, including the recent Sol Price Award for responsible journalism.  But honors alone don’t cover the bills.  Our loyal readers who appreciate timely, relevant news are what supports our nonprofit media outlet.

We can't do this without you! Please donate at http://www.eastcountymagazine.org/donate