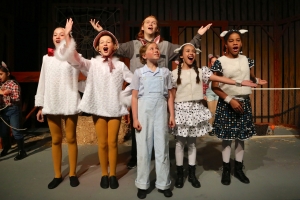 February 24, 2016 (Santee) - The Pickwick Players in Santee are a different kind of group. They perform adult plays, children's plays, and mixed plays with people of all ages, as with "Charlotte's Web," based on the book by E.B. White, published by Harper Collins in 1952.What makes this unique is that it's rare. We have many youth productions, adult productions, adult productions with a kid or two. However, besides St. John of the Cross in Lemon Grove, which does a mix of all ages in their plays once a year, in the spring (This year they are doing a Poppins in April - call rectory for more details), I don't see this combination often.. Four adults, two teenagers, and 13 incredible youngsters were all part of the Pickwick Players’ cast. 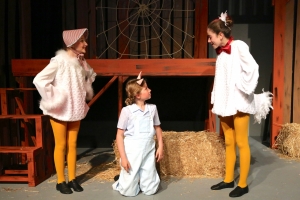 Wilbur the pig and Charlotte the spider are equal stars of the story. When Wilbur is born a runt, Fern's dad wants to kill it. Fern begs him not too. Her father agrees to let Fern take care of him, but as it grows up still plans to kill and eat it. Fern once again begs her father to keep hi, Her father agrees to let the pig live at a neighbor’s home. The neighbor then plans to eat Wilbur. But Wilbur becomes friends with Charlotte, who comes up with a plan not to let this happen.

This is a story of friendship, love, and the ultimate sacrifice.  We also learn that everyone must face the end sooner or later. 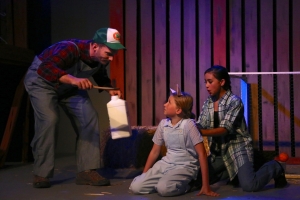 Alyssa Salacup, a college student, portrayed the "Radiant" Charlotte with a wonderful spider costume. Her friend Wilbur (and how hard is it to play an animal?), portrayed by 10-year-old Julia Van Skike, did a "Terrific" job. Eileen Parks played Fern. The favorite part in the play for me, my sister and my great niece was Lamb, played by Emily Sade Bautista; she had such attitude--she was too adorable. Templeton the rat was another favorite; the role was played by Serra High's David Armes, who brought the humor. The four adults, Doug Henderson, Renee Levine, Max Patag, and John Lorah, did a splendid job, bringing the country farm life to the show. The goose, Mackenzie Wrap, and Gander, Gabriela Marin, were perfect. All the "Humble" animals did great jobs. 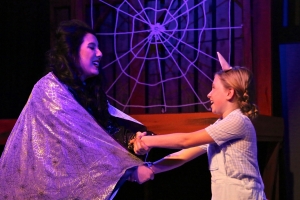 I loved the set, a wonderful barn with loft, hay and a giant web above the loft. Twelve songs (yes, this is a musical) and several dances choreographed by Alisa Williams. SOME PLAY  directed by Frank Remiatte.