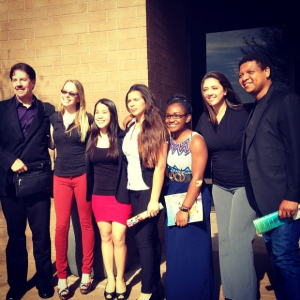 April 24, 2014 (El Cajon) – By a unanimous vote, El Cajon’s City Council on Tuesday voted to grant $10,000 to fund the San Diego Youth Choir, a multi-racial, multi-ethnic and multi-cultural community youth choir based in El Cajon. The group’s mission statement is to empower young leaders through musical excellence.  It’s mantra is “Empowering San Diego County youth, one note at a time.”

“What it really is, is an investment in children’s future,” Councilman Gary Kendrick told East County Magazine. “$10,000 today could save us $100,000 tomorrow in police costs and property crimes.”  He added that performing together also builds self-confidence and a sense of accomplishment, as well as forging bonds that can last a lifetime.  “My son still has close friendships in Hollywood that started when he was in Christian Youth Theater in San Diego,” Kendrick recalled.

The San Diego Youth Choir (www.youthchoirsd.org) aims to be housed in a central location in El Cajon with state of the art rehearsal space, practice rooms, dance rooms, and a recording studio.

Choral leaders will work with approximately a thousand high school students across San Diego County and aspires to see 90% advance to either college or the military after high school.  Each school group has its own team leaders to develop leadership skills. Students practice at their own schools as well as attending one combined rehearsal each week.

The musical group features concerts at local high schools starting this year with Lincoln, Cajon Valley, Helix, Crawford, and Grossmont.  Performances at other venues ranging from Disneyland to a Padres game are planned for the future, along with recording an album.

“This will be an exciting journey for all of us,” Artistic Director Jason Prater writes in a letter posted on the choir’s website.

Prater is a graduate of the University of California, Los Angeles and an Army veteran.   He has held staff positions with private academies and the Boys and Girls Club of Greater San Diego, also serving on the ministry staff of Shadow Mountain Community Church and the Salvation Army Kroc Center, as well as pursuing pastoral ordination currently at El Cajon Wesleyan Church where he serves as Outreach/Worship Director.

Musical  Director Jonni Glaser, also a keyboard/piano player has been credited on Grammy-winning albums with superstars such as Christina Aguilera, Chante Moore, Brandy and has also made TV appearances.

Representatives of San Diego Youth Choir met with El Cajon Mayor Bill Wells and gave a presentation to the Council and staff earlier this month, before Tuesday’s vote to approve funding.

A Columbia University study on music in schools found students who participated had higher self confidence, cooperated more with teachers, expressed themselves more fully and had much lower rates of drug and alcohol abuse.

“It is clear,” the summary concludes, “participation in a solid, quality music program makes the difference.”