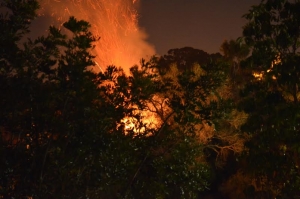 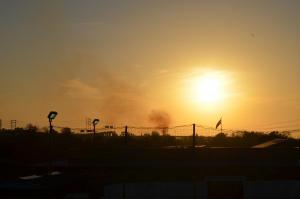 February 21, 2014 (San Diego) There is nothing like a romantic evening outside by the porch with a fire. Well, it was not quite that. Over the last two months we have had a good dozen fires in the Fashion Valley area in San Diego. Since some have been posted on the Twitter feed, you even saw them.

Tonight they got a tad too close. Both Tom and I were on the porch, with cameras, tripod, and scanner running. So here you go, two photos, taken with two different cameras, of fire number three (in about an hour), there was yet another start about a mile down the river. This one was close enough we could feel some of the radiant heat. 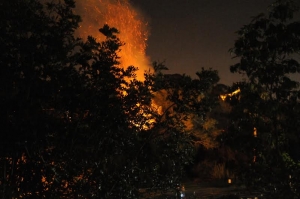 I guess we are lucky, of sorts that the Arrundo has not caught on any of these. But yes, we even have brush fires by the coast. There is plenty of the stuff by the San Diego River.

What was truly weird, the soccer game at the Y never stopped. So at times you could say, news does occur outside your window. Oh and yes, the Fire Department does consider these suspicious in origin.