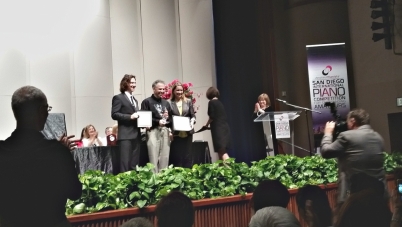 July 19, 2016 (San Diego) - The first ever Amateur Pianists San Diego International Piano Competition For Outstanding Amateurs was held in San Diego from July 15 – 17th at Point Loma Nazarene University. The creator behind it, Glenn Kramer, is to be given credit for not only making it happen but for growing the largest amateur piano Meet Up Group (an online way to organize special interest groups) in the country.

Kramer’s Amateur Pianists Meet Up members include residents in East, North, and South County, as well as San Diego proper.

Robert Berkowitz of Natick,Massachusetts was the winner of the competition. His mother resides in San Carlos, California. Berkowitz’ choice of music to play in the final round included three pieces by composer-pianist Lajos Delej, tracing back to the Holocaust.  His mother, who was from Transylvania, was engaged to Delej, who was born in Berlin,Germany and emigrated to Budapest, Hungary to escape persecution of Jews in Germany.  But he did not survive the Holocaust, and she subsequently married another man.

The competition occurred near his mother's birthday, and that is why Berkowitz chose to enter it, he told East County Magazine. "It was a great birthday present for her that I happened to win first prize."

According to Kramer, the competition had 30 participants and had a wait list of other pianists who wanted to compete in the three day event.Competitors came from as far away as China, Berkowitz said.

Amateur piano competitions have had a higher visibility in the USA and the world in the last estimated 15 years.  Competitions that include brilliant pianists that had to choose between careers, like becoming a doctor such as Robert Berkowitz did, or family life took precedence.  The age limit started at 25 to even compete in this San Diego competition and went all the way up to 80.

Paul Anthony Romero won in a Paris competition in 2002 and performed for the other attendees the night before the finals. Romero’s life now involves performing and is also on Sony’s payroll to compose and play for films and games.

Ms. Rewa Colette Soltan, vice chair of the event and shared mistress of ceremonies, not only paired up with Glenn Kramer when he first proposed creating the first ever amateur piano competition in San Diego a year ago  but helped find  donors  and sponsors who stepped up to the plate.

While others may prefer their competitions on TV like The Voice or American Idol others prefer the real life competition of pianists who played Chopin, Rachmaninoff, Debussy, Mozart and many other composers.  The competitors not only supplied suspense of who the four jurists would select as the winner but had Berkeley resident, Zachary Weiner, chosen by the audience for the Audience Favorite Award. Weiner performed Bach and also placed third in the competition.

Competitors from the USA, China, and France brought their musical abilities to the three-tiered elimination rounds that culminated with Berkowitz earning the $2,000 first place, Yiran Wang the $1,000 second place, and Zachary Weiner the $500 third place award.