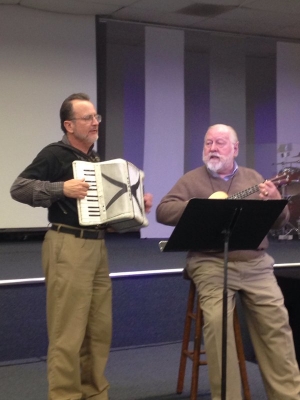 By Liz Alper
January 31, 2016 (Spring Valley) - On a brisk, chilly night in Spring Valley, I and other members of the Saps at Sea, the San Diego Chapter of the Sons of the Desert, the official Laurel & Hardy fan organization, gathered at Williams Hall at Trinity Church for a night of laughter and delicious cake at intermission.

Our theme this month was all about animals!  The Porky Pig cartoon we were supposed to watch was unfortunately scrapped, so we settled for some Mickey Mouse and Donald Duck pl 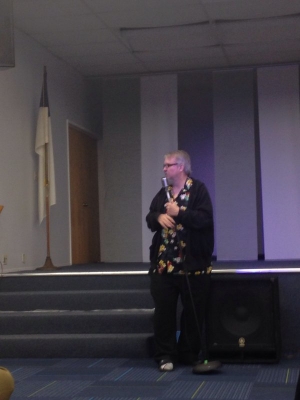 aying polo.  It was fun for me to spot all of the caricatured celebrities like Charlie Chaplin, Harpo Marx and of course, Stan Laurel and Oliver Hardy.
Our guest comedian was one of my favorites, Buster Keaton, in a talking film called Allez Oop.  I was surprised he had such a medium-toned voice!  I was always told he had a low baritone voice.  The film was excellent; Buster did all of his own stunts and saved his crush in the end.
After an intermission filled with carrot cake and red velvet cake (and some fabulous lobby cards of films from the Western genre), it was on to the feature presentation!  The Laurel & Hardy films we watched were, in order, Laughing Gravy (in which Stan and Ollie have to keep their dog, Laughing Gravy, a secret from their landlord), Wrong Again (a silent short in which Stan and Ollie mistake a horse named Blue Boy for a painting of the same name and bring it to a millionaire's home) andThe Chimp (Stan and Ollie adopt a chimp from the circus and also have to keep it a secret from their landlord, with a few recycled gags from Laughing Gravy). 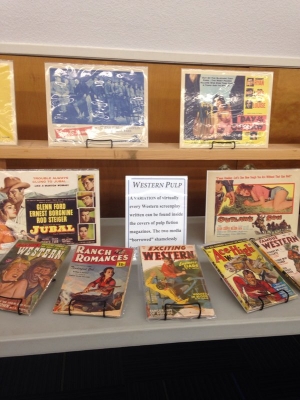 All in all, it was a fun night and I'm looking forward to the next meeting!