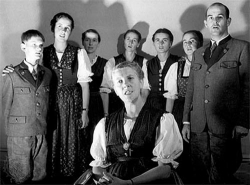 March 8, 2011 (San Diego)—Young actors ages 6 to 18 are invited to audition for an upcoming musical production of The Sound of Music. Young actors will find plenty of opportunities to learn their craft and dazzle onstage,” a press release on the auditions states. Scholarships are available. Everyone who auditions will be in the show!

Auditions will be held Thursday, March 17 from 4-8 p.m. at the Joan B. Kroc Theatre, 6611 University Ave., San Diego. Scroll down for details on the show and auditions.

Celebrating its 45th Anniversary, Sound of Music was the final collaboration between Rodgers & Hammerstein proves it was destined to become the world's most beloved musical. When a postulant proves too high-spirited for the religious life, she is dispatched to serve as governess for the seven children of a widowed naval Captain. Her growing rapport with the youngsters, coupled with her generosity of spirit, gradually captures the heart of the stern Captain, and they marry. Upon returning from their honeymoon they discover that Austria has been invaded by the Nazis, who demand the Captain's immediate service in their navy. The family's narrow escape over the mountains to Switzerland on the eve of World War II provides one of the most thrilling and inspirational finales ever presented in the theatre.

Music by Richard Rodgers, Lyrics by Oscar Hammerstein II, Book by Howard Lindsay and Russel Crouse, Suggested by "The Story of The Trapp Family Singers"

DATES AND INFORMATION:
Auditions: Thursday, March 17th 4-8 p.m.
Callbacks: Tuesday and Thursday March 22 & 24th by invitation only at the Kroc Center
Rehearsals: Tuesdays, Thursdays and Saturdays (not all roles rehearse every day)
Performances: May 19 - 22, 2011in the Joan B. Kroc Theatre

Please call 619-269-1540 to register for the show and schedule your audition appointment.