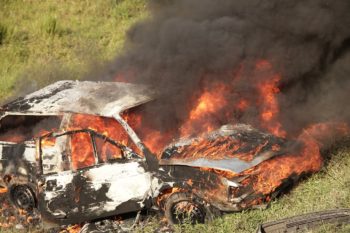 September 3, 2016 (San Diego's East County) - In San Diego County, wildfires are our biggest disaster risk, and nearly all of them are human-caused.

So what we can do to stop sparking fires? Especially as we head into peak fire season, in our fifth year of drought and with an abundance of dried grasses and brush? And as we get dry, strong winds that can push fires towards communities?

To answer that question, San Diego County Fire Authority and CAL FIRE Capt. Kendal Bortisser discussed the top causes of fires in the County areas last year and to date this year.

In cases in which the investigator was able to determine a cause, most wildfires this year and last were caused by vehicles (see graphs below or here for other top causes).

Catalytic converters often ignite fires, Bortisser said. Sometimes a catalytic converter, which is located under a vehicle’s engine, spits out hot materials that can cause fires without the driver even realizing it. The driver inadvertently may be starting various fires as he or she continues along a roadway.

Other times, drivers may decide they want to pull over on the side of the road or drive into a field to sightsee or make a phone call, but if there is brush or grass under the car, it can catch fire from a catalytic converter, Bortisser said. He advises motorists to be very careful of where they are driving to be sure they don’t accidentally start a fire under their vehicle.

Bortisser recommends that when drivers have to pull over, they do so on paved surfaces whenever possible, rather than off the road where brush or trees can ignite. If a car does catch fire, exit it as quickly as possible in a safe area away from traffic.

The next step should be to call 911 to report the fire, he said.

Bortisser recommends that drivers carry a fire extinguisher in their vehicle in case of an engine or brush fire, and, if they have one, they can try to extinguish the fire on their own. If the car fire overwhelms the extinguisher, the extinguisher can at least start to control the fire until firefighters arrive on scene, he said.

There are many additional steps that we can take to prepare ourselves, families and homes for wildfires and emergencies. September is National Preparedness Month and serves as a last-minute reminder for everyone to take steps to lessen that risk around our home and community, and make sure we all have an emergency plan that everyone in the family is familiar with, an evacuation bag to grab if you have less than 15 minutes to go, and enough emergency supplies for you and each person (and pet) in your household to survive on your own for at least three days or more.

“You can prepare for fires by maintaining good defensible space around your home, creating a family disaster plan, and registering for the region’s mass notification system called AlertSanDiego,” said Holly Crawford, director of the San Diego County Office of Emergency Services. “During a fast moving wildfire you may have to evacuate your home with little to no advance warning. Planning and preparing both your family and your home could be lifesaving. ”